As I hinted at in my last post, I want to now take the opportunity to share some of the research that I conducted for my undergraduate thesis. My topic stemmed from an idea about the controversy I grew up around in my home town of Hamilton, Ontario surrounding the two local highways – the Lincoln M. Alexander Parkway (LAP) and Red Hill Valley Parkway (RHVP). These two highways are controversial for a number of reasons. They were first proposed back in 1951 and initially faced significant backlash from environmentalists because their construction meant the destruction of pristine environmental habitat. Facing economic concerns, the city caved under provincial pressure and finally approved construction in 1987, completing the LAP in 1997 and the RHVP in 2007. Growing up, I can remember hearing countless stories about how people regularly got into accidents on these parkways. It seemed like it was always on the news. On the other hand, these parkways provide seamless transportation access across the entire city, forming a route that connects Highway 403 and the QEW, allowing for transportation between different cities. For my project, I wanted to examine how Hamilton’s road transportation network might differ had these two parkways not been built and to get an idea of whether or not the construction of the LAP and RHVP were worth it, specifically from a transportation perspective. 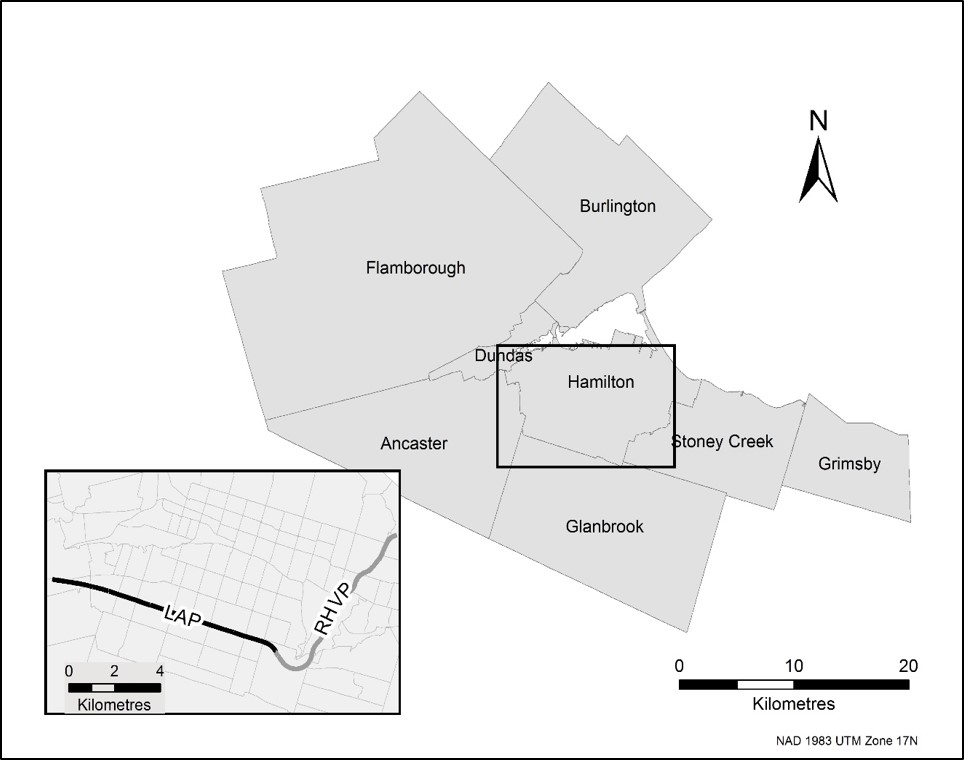 To tackle my study problem, I made use of a custom GIS-tool created to rank criticality of roads, called the Network Robustness Index (NRI).  The NRI allows you to simulate traffic using User Equilibrium traffic assignment techniques. Roads associated with a high NRI value are those that significantly impact the system-wide travel time when removed/disrupted (i.e. highways have higher NRI values since they are significant routes of transport). For a more in-depth explanation of how to NRI works, refer to Scott et al., (2006). In conjunction with traffic data taken from the Transportation Tomorrow Survey for trips between 8:00am and 8:59am (peak morning traffic), I broke the study problem into several different scenarios (Figure 2). I needed to break this study into scenarios in order to compare and contrast the effects of parkway removal on road criticality ranking. These scenarios include historically accurate “base cases”for study years before and after the construction of both the LAP and RHVP. Scenarios were also created where I removed either the LAP or both (if it existed during the reference time period), so that all possible situations were accounted for.

Figure 2. Scenarios for my research project.

After running a simulation for each scenario (each one taking approximately one day to completely run), I was able to start making some maps. Figure 3 shows the 1996 base case results. This map shows you that the most critical roads in 1996 were Highway 403 and the QEW towards Toronto. 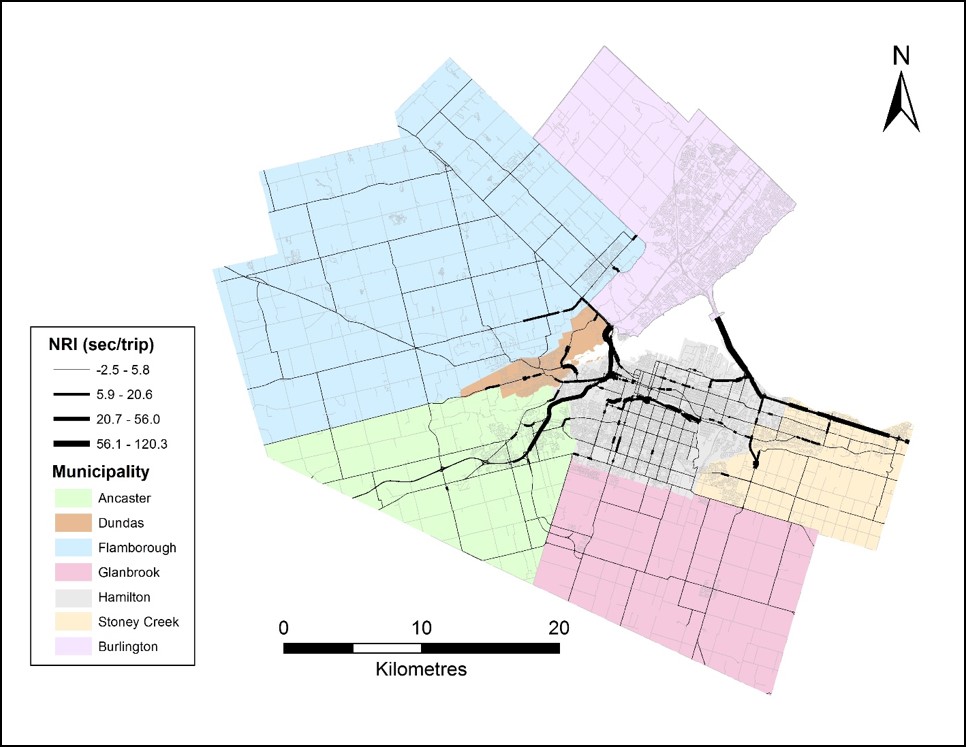 Figure 4 shows the 2011 base case results. This time period now includes both the LAP and RHVP, which are both identified as critical along many portions. Once again, Highway 403 and the QEW are the most critical roads. 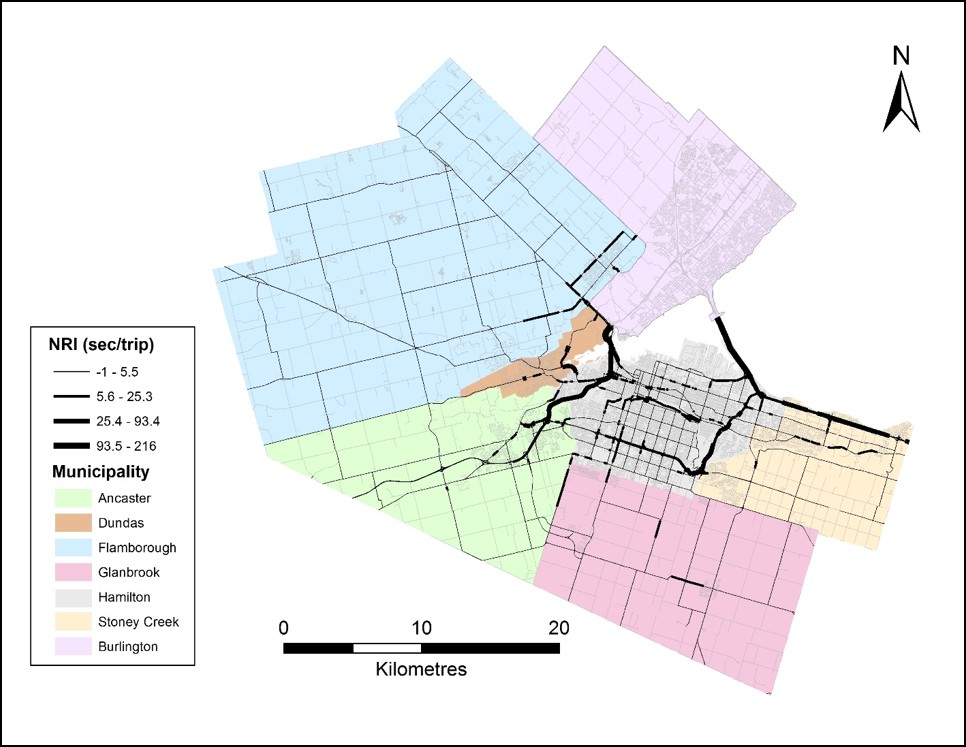 Taking a difference between these two maps reveals that the roads becoming most critical over time are in fact Highway 403 and the QEW, despite being the most critical roads in both scenarios! Another observation was that mountain access roads became significantly less critical over time, likely due to induced demand created for the LAP and RHVP. When I removed the LAP and RHVP and compared it to my base case difference results, a very interesting finding emerged. Several portions of Highway 403 appeared to become more critical than the base cases, indicating that the LAP and RHVP have had a significant mitigating effect on road congestion over time. On the other hand, the QEW appeared to become less critical! This is due to the effect of spreading traffic flows across the system due to removal of the LAP and RHVP – specifically that people would be forced to rely on Highway 403 more than the QEW if they were not built. Many other interesting findings were found in this paper, and are documented in the current draft of my thesis. If you would like to take a look, feel free to reach out and I can share it with you!

As you have read about, a diversity of interesting questions can be solved using GIS. In this study, I used GIS to create imagined scenarios of Hamilton’s road network to answer fundamental questions about the effect of proposed highways on the city. Hopefully this post has opened your eyes to some of the analysis that can become possible using GIS, even when you consider simple problems.