Chronic illness is a prevalent concern, especially in Canada where it accounts for a high proportion of annual mortalities (Statistics Canada, 2017). Encouraging physical activity is important to prevent chronic illness, increase the overall mental and physical well being of the population, and increase the use of active transportation to facilitate more sustainable communities (Booth, Roberts, & Laye, 2012). Features of the built environment can facilitate or inhibit levels of physical activity. There have been many attempts to quantify and measure how conducive neighbourhoods are to physical activity through walkability analyses like Walk Score and Canadian Active Living Environments (Can-ALE), though none have solved the issue of increasing sedentary time and the rise of chronic illness. Past attempts to quantify the access to built environments conducive to active living have included features primarily unique to urban areas and are thus inherently biased towards explaining trends in accessibility to physical activity infrastructure solely in urban areas. Scores like Can-ALE and Walk Score focus on intersection density, access to amenities, and access to public transportation, all features more present in urban areas. The ActivScore has been created in an attempt to more thoroughly represent access to physical activity infrastructure across the incredibly rural province of Nova Scotia by broadening the scope of analysis to include features of the built and natural environments accessible in both urban and rural areas.

I have created a web application that returns a score out of a hundred for any civic address in Nova Scotia based on what features of the built environment are accessible within a ten-minute (800 m) network-based buffer neighbourhood around each address, and a breakdown of how that total score was derived for the following ten indicators of physical activity potential: 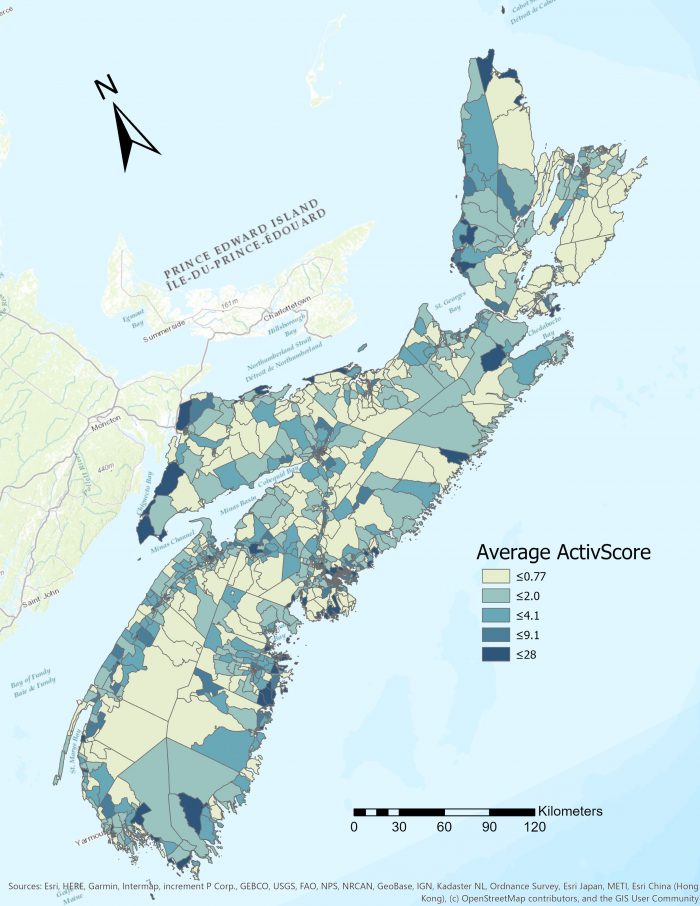 The areas in the map above that have darker colours have higher average ActivScores. The areas of higher average scores are clustered around Halifax Regional Municipality, the North of Cape Breton, and near the boarder with New Brunswick. The scores tend to be higher near the coast where there is greater access to recreational areas for physical activity. 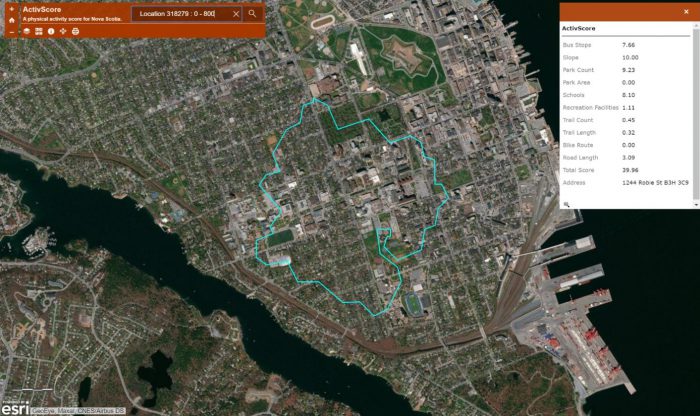 Results for an urban area in downtown Halifax.

Results for a rural area in Lawrencetown, Nova Scotia.

The figures above are screenshots of this web application. The top one is the user interface for the ActivScore web application. The second shows results for a highly urban area in Halifax, and the third shows results for a more rural area in Lawrenctown, Nova Scotia. Clearly, the urban results differ greatly from the rural results both in scores and the shape of the 10-minute walk neighbourhoods. It is important to note, however, that the rural results include scores that are above zero, and show that there is some access to physical activity infrastructure. The map shown above, also illustrates that high scores exist for the ActivScore in areas throughout the province, outside of Halifax (the main urban centre in Nova Scotia).

The ActivScore can be used to illustrate the differences in access to physical activity infrastructure across Nova Scotia and can be used to inform the distribution of resources based on where the necessity is highest, encourage active living, and facilitate the transition to more sustainable and vibrant communities. This tool has the exciting ability to inform the development of more complete neighbourhoods across the province and be directly applied to policy decisions.