This year I am three quarters done my undergraduate degree in Environmental Science and had the opportunity to take “Application of GIS in Environmental and Ecological Issues” at Dalhousie University as a part of my certificate in GIS. One of the first things I learned in my first year of environmental science was that environmental issues are “Wicked” Problems, meaning that they are multifaceted issues that require multifaceted solutions. This semester I was able to clearly apply GIS-based solutions to many multi-criteria problems including the Urban Heat Island Effect in Toronto, siting a Wind Energy farm in Nova Scotia, and locating the Least Cost Pathway for a light rail transit line from the suburbs outside of Halifax to the downtown core. I will go through each of these complex issues and the GIS-based solutions that I applied to them.

For context, the Urban Heat Island (UHI) effect occurs in highly built up urban areas that tend to have higher surface temperatures during the summer months than more rural areas with less impervious surfaces. Land use change is one of the largest contributors to increasing the UHI effect in converting agricultural land to urban developments. UHI is a combination of socio-economic variables of increasing urbanization and need for development, as well as ecological change as a result of development, it is very multifaceted. The study area for this analysis was Toronto, Ontario. Toronto is Canada’s largest city and continues to increase density in the urban core, and expand out past the city bounds as the population has been steadily increasing for over a decade.

For this analysis I conducted a regression analysis of the Mean Surface Temperature vs. the percentage of impervious surface in Toronto by dissemination area, and then again by hexagonal tessellation for the East York neighbourhood (which happens to be where I grew up!). I found there to be spatial autocorrelation and clustering in the analysis when conducting a Moran’s I Cluster and Outlier Analysis (Global). There was found to be a moderate-strong relationship between mean surface temperature and mean impervious surface through both dissemination area and hexagonal tessellation analysis. 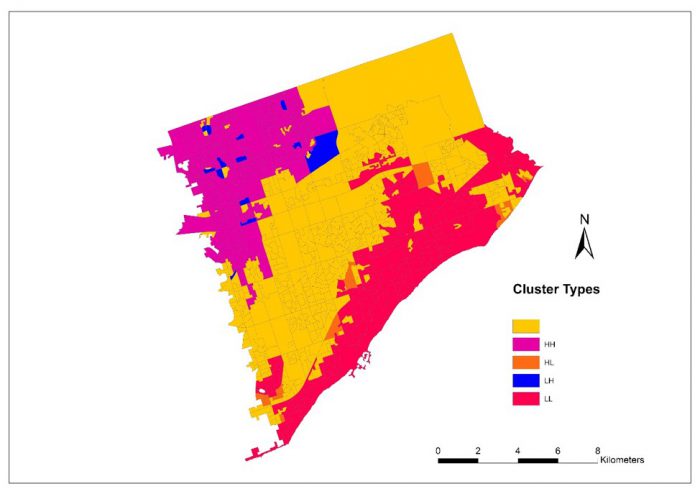 With the recent International Panel on Climate Change (IPCC) special report stating that we have essentially 11 years to reduce carbon dioxide emissions to avoid the worst impacts of climate change, development of renewable energy sources is increasingly important. Siting areas for development must take into account many factors including site ecology, the technology available, the impacts on the economy, as well as the opinions of stakeholders over which criteria for siting are the most important. Local renewable energy, especially wind here in Nova Scotia, has the potential to boost the economies of historically impoverished rural communities while also aiding in the transition off coal and fossil fuels. There are however, also many ecological considerations as to where the least negative impact for building wind turbines would be while providing the best location for harnessing wind power. Here in Nova Scotia, the vast majority of our energy still comes from coal. The analysis I completed aimed to determine what locations in the counties of Halifax, Hants, Colchester, Cumberland, Pictou, and Guysborough are suitable for a wind energy development. I completed two analyses, one with equally weighted criteria, and a second with pre-determined weighting criteria. The criteria included were Highest Elevation, Avoid Karst Topography, Depth to Groundwater (determined using spline interpolation from a DEM), Distance to Coast, and Percent Slope. 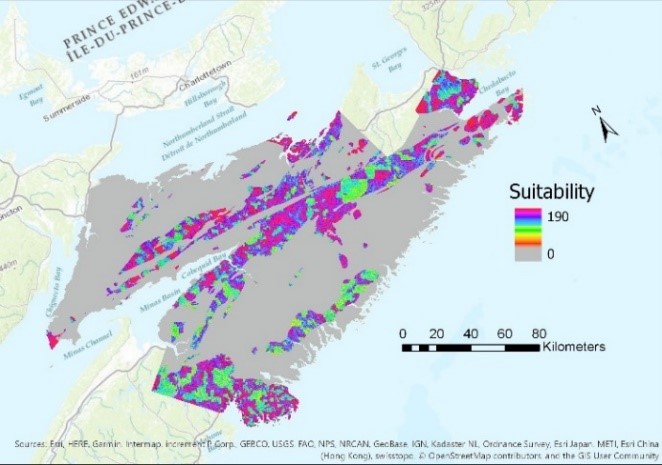 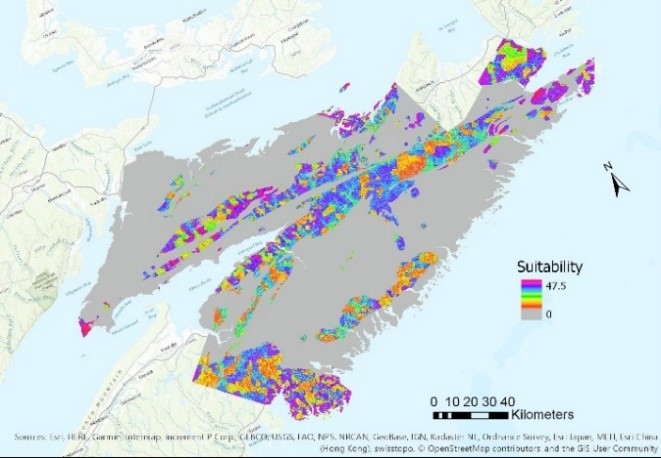 Weighted suitability output weighting depth to groundwater (30%). distance from coast (30%), higher elevations (25%), and slope (15%), with a requirement that there be no Karst topography.

Halifax Regional Municipality is one of the geographically largest municipalities in Canada and continues to be culprits of extreme urban sprawl outside of the downtown core. This results in many commuters from outside Halifax into the downtown core contributing to congestion on major routes and increased carbon dioxide emissions. Nova Scotians also tend to spend close to $10,000 CAD on transportation a year, primarily from vehicular transportation. Having rapid, accessible public transit could decrease transportation costs, decrease carbon dioxide emissions, increase mental well-being, and connect more isolated rural areas of HRM to the downtown core. To complete this analysis I combined criteria to create a total impedance to building a transit line raster layer. The total impedance combined the factors of: proximity to wetlands, proximity to lakes, proximity to rivers, percent slope, and average number of commuters. I then completed a least cost pathway from outside the downtown core near Bedford, to the peninsula. 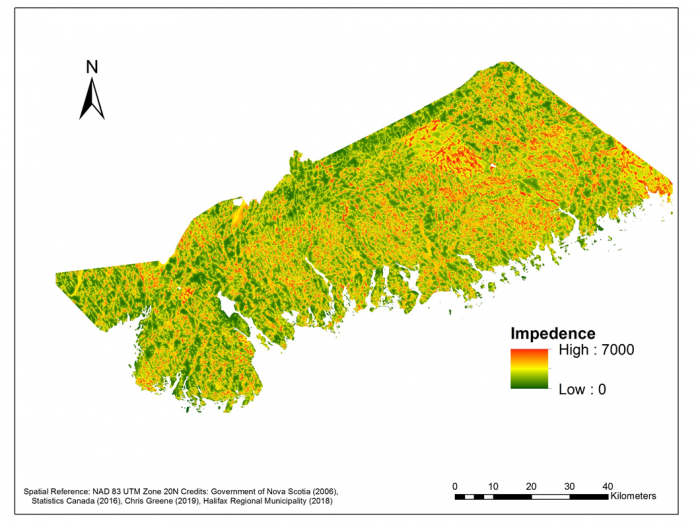 I then considered some additional variables that should be included in the analysis. One being the distance to coast. The LCP primarily resulted in a line right along the coast which could have negative impacts on both the coastline and harbour, similar to proximity to other water bodies initially included in the analysis. It could also be at risk of destruction from sea level rise. I also included another potential variable of median household income, to ensure that people in low income communities who would benefit the most from accessible and rapid transportation have access to the transit line, rather than being isolated further.

All three of these issues are clearly wicked problems, but I discovered the superb ability that GIS has to consider multi-criteria problems as well as take into account stakeholder positions. I am excited to move forward with my honours research this summer examining the active living potential of neighbourhoods in Nova Scotia by creating an index!