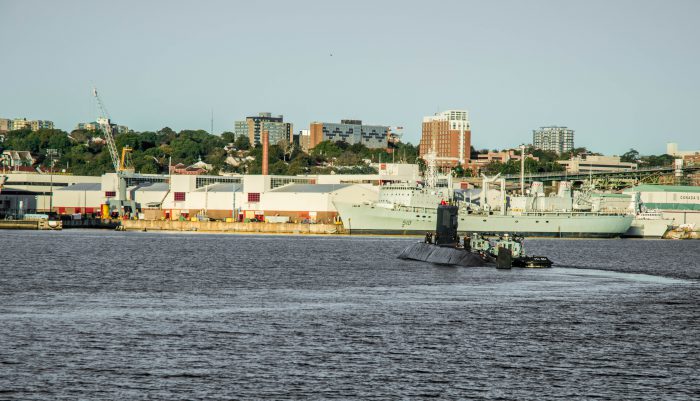 A naval submarine coasts towards port in the Halifax Harbour. Simon Ryder-Burbidge, 2016.

In Halifax, people are passionate about the ocean. Steeped in sea-faring tradition and leading the nation in seafood export today, Nova Scotia is, in many ways, defined by the highly productive waters of the Northwest Atlantic, and the many inhabitants that share its coastline. Halifax, as the largest city not only in Nova Scotia but all of eastern Canada, is a hub for marine-related activity, employment and research. Several universities within the city limits have faculties entirely dedicated to ocean study – one of which I am a part, the Marine Affairs Department at Dalhousie University. Despite the integral role that the surrounding seas play as a part of life in Halifax, the city has a bit of a dirty secret where the land meets the water. Marine pollution is far from exclusive to Halifax, but the city has a long and complicated history of employing the ocean to act as an urban cleaning system – over 250 years of dumping sewage and garbage and refuse of all makes, shapes and sizes into her harbours has led to a depleted and by-times deadly ocean ecosystem for the marine organisms who would call the area home.

The thing is, the waters of the harbour weren’t always like this, and they certainly need not maintain their existence in the minds of many Haligonians as a despondent, unusable, disease-inducing body.

To that end, several organizations around the city have decided to take action in changing public perception surrounding the harbour, and cleaning up its urban shoreline. One of these is Halifax’s Clean Foundation, who commissioned our marine management graduate studies class to build a foundation for the long-term collection of marine pollution data at several sites around the harbour. Of course, there is a significant GIS aspect to this work which can be investigated from a variety of different angles. With this and future posts, my hope is to paint a picture for interested readers, pulling together concepts involving waste culture, behavioural studies, biophysical ocean systems, and the potential for GIS as a tool to combat marine pollution at a local-to-global scale. Stay tuned, more to come soon.