Since I struggled to go from a google maps location to a shapefile, I thought it could be useful to write out the steps that I took in case anyone else goes through the same struggle. Undoubtedly I did this as an exercise in and undergrad GIS course, but it’s a whole other can of worms when you’re doing it with your own data. Here’s what I did:

1. I saved the participant’s location as a .kml file on Google Earth Pro. I needed to use the “Add Placemark” function so that I could give the file a new name, with the participant’s ID number. Otherwise, you’ll have trouble down the line… 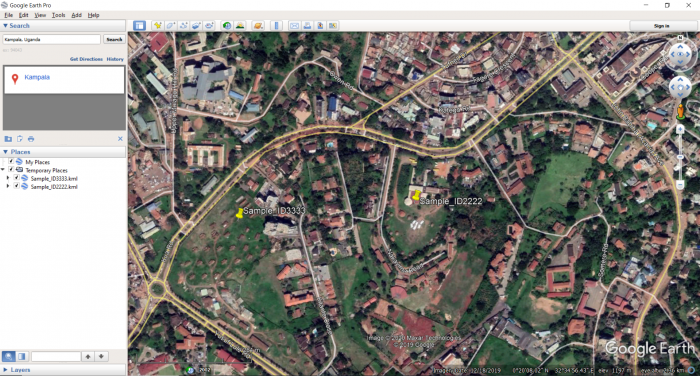 2. Having created all my .kmls, which can be seen on the sidebar (I had about 150 of them), I saved them to “My Places.” You can then right click My Places to save all your places as one kml file (or kmz, it doesn’t really matter… KMZ is just a zipped/compressed KML).

3. Now over to ArcGIS Pro. Search the KML to Layer tool, and input your KML file, output to wherever. Run the tool and there you go! Obviously you can play around, add a basemap and change the icons and everything. 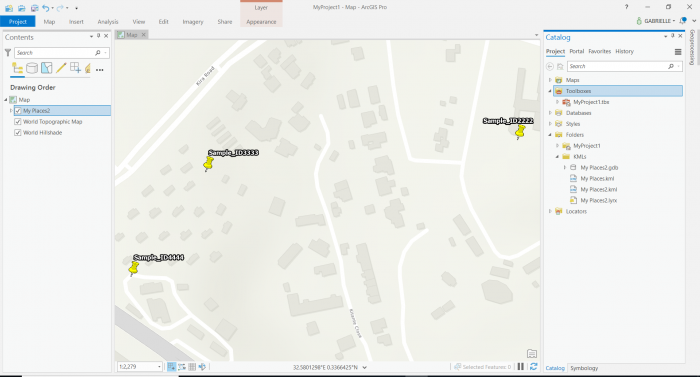 Seems straightforward, but this is actually a streamlined version of what I did. First I made the aforementioned mistake of not creating a new placemark, which wouldn’t do because I needed each pin to be identified by patient ID. Second, the method I actually used involved opening the master KML file in excel and then importing x y coordinates into ArcPro, because I needed to do some extra editing of the coordinates. An extra step, same result. I also initially had 150 individual kml files, before I realized you could save them all as one. When that was the case, I tried to batch process the kml to layer tool. This was the most time consuming part. I had to re-learn how to use the model builder, then create a model which would go from kml to shapefile, while keeping each files’ ID names. This did eventually work, with the help of Western’s lovely GIS Analyst, but as research is iterative, I needed to go back and change some of the GPS locations, so I needed a faster method that I could do without help. Is there a better way to do this? Yes probably. But these are the steps that I went through.