I am currently a first year Master’s student at McMaster University, working for Dr. Darren Scott. I just graduated from McMaster in April 2017, with a degree in Honors Earth and Environmental Science and a minor in GIS. During my fourth year, I completed an undergraduate thesis with the help of my supervisor, Patrick DeLuca.

The scope of the thesis was to monitor land change in the badlands of Basilicata, Italy, from 1993 to 2015. The further development of badlands has strong impacts on the reclamation efforts of these erosional landforms. This study made use of satellite imagery available publicly from USGS Earth Explorer. One of the methodologies used in this study was a clay index. Badlands tend to form in areas of fine clastic sediment, such as clays and silty clays. The clay index, which used a ratio of the SWIR1 to the SWIR2 bands, allowed for these clay minerals to be enhanced. Secondly, a difference in normalized difference vegetation index (NDVI) between subsequent years was used to identify change in vegetation cover as bare, unvegetated slopes leads to areas being highly susceptible to badland formation. Lastly, the most reliable data was from a principle components analysis (PCA) as this method was able to capture statistically significant changes in vegetation, based on the information contained in the third component. This was seen as the superior method due to the higher levels of accuracy from previous studies regarding land cover change. Since areas of loss are defined by values below the mean while areas of gain are defined by values above the mean, images from the third component could be categorized and quantified based on the degree of change. 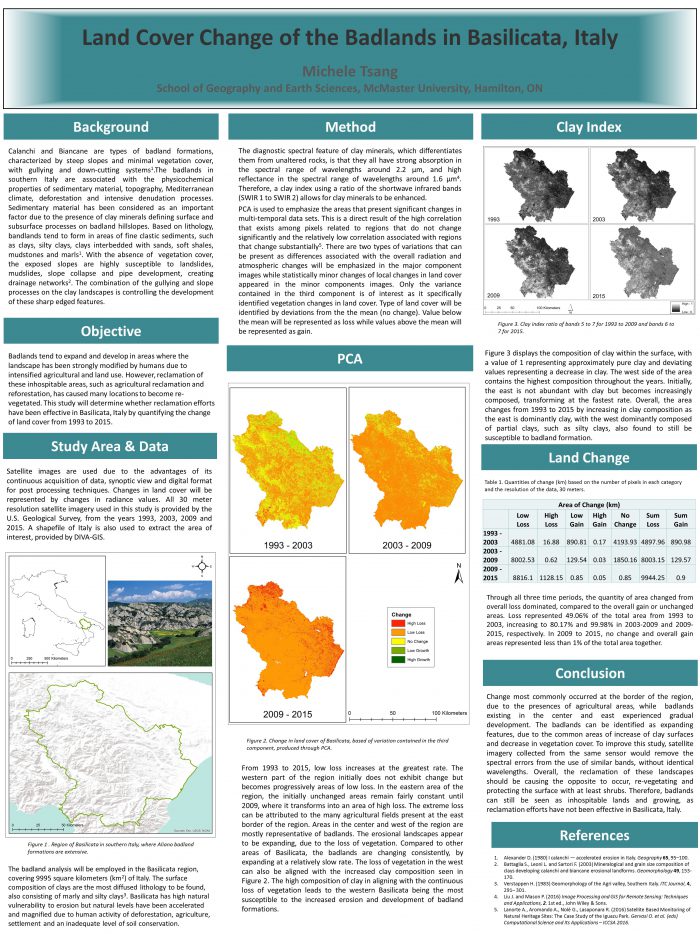 Through all three time periods, areas of loss dominated. The greatest amount of change occurred in the most recent time period of 2009 to 2015, identified through both PCA and NDVI. The combination of the increased clay surfaces and the decrease of vegetation cover in the south shows that the badlands in Basilicata are expanding and the terrain is becoming increasingly susceptible to further development of these erosional land forms. The most recent data from 2015 indicates that the badlands are currently harsh, inhospitable environments. In order to identify the appropriate reclamation efforts, it is important to note that the badlands are expanding and its’ current condition predicts the areas to continue to expand in the future.

This thesis project would not be possible without the help and guidance provided by Patrick DeLuca!