I feel like the New Year is a good time to both reflect on the past and consider the future. I’m sure I’m not the only one who has dusty old GIS projects and ideas that we never had – or made – the time to work on in ages, whether it be an idea for a new workflow or something we started as a hobby. In this case, I’d like to talk about an area where I haven’t seen many applications of GIS, but I feel has great potential – GIS as a tool for game content development.

Now, with the development of 3D graphics engines and games (CityEngine, Unity 3D, and many more!) there has been some work on using game platforms to render and explore real-world cities. What I’m looking at is closer to the opposite – using real-world GIS tools and applications to help create a game world. Some work has already been done on 3D terrain generation from DEMs in order to generate pseudo-random or random procedurally generated terrain which is highly realistic. While I find this quite interesting, I’d like to take a closer look at how GIS can be used in the planning and coordination stage.

A number of years ago, I was involved in a small game community project (Other-Life) where a whole new continent and set of maps were going to be developed by the community members. The developer gave us certain criteria in terms of size, scale, layout, and some quirks of the map making software, and other community members had come up with a history and general background for the development of the continent itself. Armed with this information, an artist drew up a vector graphic of the physical continent, which I then imported into ArcMap (9.1 at the time). Using this as a base, I was able to produce a series of maps to guide the content creation of the individual game maps and ensure consistency between maps. It was trivial to generate map series for each in-game map with appropriate grids to indicate where each type of terrain should be placed, making the terrain design much easier. Additionally, the in-progress game maps could be re-imported and georeferenced to their containing rectangle to provide quick and specific feedback for corrections. The overview also allowed the community to decide on different types of terrain – mangroves, plateau, desert, floodplains, etc. – and keep this consistent within areas. As more maps were completed, these were added to the overview, so that we had a rough map of the whole continent as well. This is still an ongoing project, which I unfortunately had to step back from due to external circumstances. 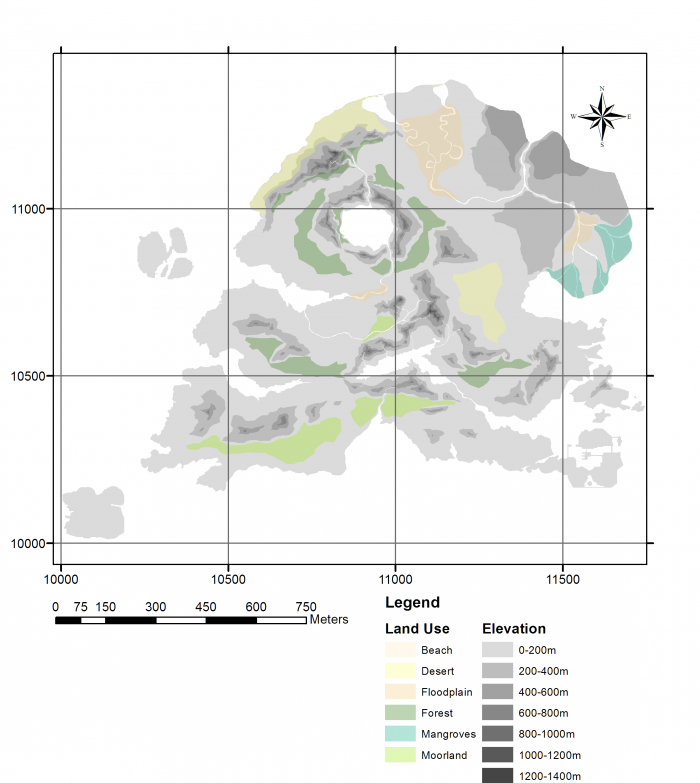 I see so much potential in this area for GIS applications and tool development. Can you imagine if an ellipsoid and geoid were defined for the game world as a whole? Integrate a geodatabase of all resources, monsters, storage access location, shops and more and you could do so much in the planning phase to ensure things are just the right distance from each other. Once roads and paths are defined and typical point to point movement paths determined, this could be used as routing information. Travel time within and between resources and the storage points would be easy to calculate in order to give the map makers feedback on placement of these features. Combine this with the work which is being done in 3D terrain generation and ideally, you could automatically generate the entire physical geography of your game world automatically.

I realize that many larger games have tools developed which will do some of the above automatically, in terms of resource location and travel times, but what if they were to use a real-world GIS for this? There are so many tools which could be used to guide or automate game world creation. Going even further, if these projects are maintained, they could be fed information on player movement and activity, enabling further data analytics. Game developers would quickly know what game areas are over- or under- used and use this to inform future development or tweaking.

In summary, this was a fun project to explore some unique applications of GIS in a different environment than what most of us typically work in. As GIS becomes more accessible, I hope to see more projects like these – can you imagine if all participants had access to the maps through ArcGIS Online, how fast and easy collaboration would be? Online, collaborative GIS is the way of the future!