Anyone who knows me well will know I love trains. Ever since I was 6 years old, I’ve been fascinated by their sheer size, power, and the mystery associated with where a train has come from, and where it is going. That’s why I wanted the focus of my final project for a second-year GIS course taken back in April 2018, to be railway related. My plan was to show in the form of four maps how Ontario’s railway network, specifically that of Canadian National Railways, has changed between 1950 and 2018. The four years I decided to map were 1950, 1978, 1990, and 2018, based the history of railway abandonment by the company.

My starting data file was a shapefile from the Ontario open data portal, but the problem with the data set was the year of reference: 1978! How was I going to accurately recreate 28 years of railway abandonment? I did manage to find a paper map from the 1957 edition of the Atlas of Canada depicting Canada’s Railway lines. I also found other non-map sources containing information on abandonment by CN through its history that I could use as a reference point. 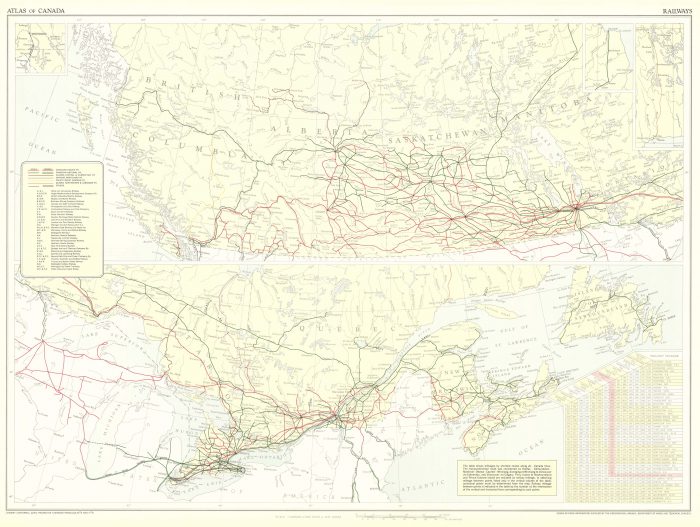 So, I had the information on what had been abandoned, and I had a rough idea where these locations were, but how was I to be accurate? Lucky for me, humans make large and long-lasting impacts when we modify the terrain! Take for instance the figure below.

This is an abandoned CN line through the southern portion of Algonquin Provincial Park that was abandoned in 1952, as seen from the ArcGIS Pro Imagery Basemap. However, even over 60 years later it is quite easy to see where the line once stood. The old rail bed can be seen starting in the top-left corner of the image at the Cache Lake boat-launch (red point in the top-left), heading east, then heading south briefly, before heading east again over two crumbling wooden tressles to the red dot in the lower right. The base map allowed me to easily draw the railway line and add it into the data set!

I was able to easily and accurately draw in the rest of the railway lines I was missing from my data set in this fashion, which enabled me to start my analysis in an earlier year than the provided data set would have allowed. This “Where’s Waldo” approach as I like to call it, can be used when looking for most abandoned sites, as the scars left by humans in the natural terrain don’t heal quickly.

Below are two maps I made representing CN lines in 1950 and 2018 respectively. For more information on history of CN in Ontario, I highly encourage a look here!