Monitoring of snow cover area in the Apex river watershed in Nunavut, Canada at different temporal and spatial scales is important to better understand and predict freshwater resource supply in that area. My previous post describes retrieval of changes in the snow-cover for a large area using MODIS 8-day composite snow cover products with a spatial resolution of 500 m.

In the summer of 2017 I had an opportunity to do the northern research in the field with Dr. Murray Richardson and M.Sc. student Keegan Smith. I used the data that we collected in the Apex river watershed to retrieve changes in the snow-cover area for the small area (~1 km^2) within the watershed.

I extracted and analyzed time-series changes of snow cover area from time-lapse images acquired by a ground camera set up in the field. 93 ground camera images were collected in the area of interest from October 12, 2016 to June 26, 2017. In support of the collected images, snow surveys were conducted to capture shapes of snow patches using GPS and GPS Snow Depth Probe. A digital elevation model was overlaid on the collected images, and snow/no snow classification was conducted using PRACTISE 1.0 software developed by Härer et al (2013).

Figure 1 shows the results of classification obtained for the camera field of view(FOV). 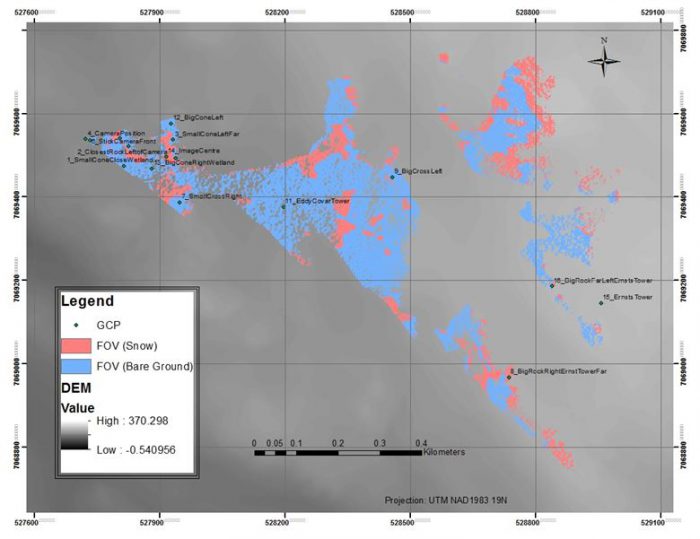 A time series graph for snow cover area as a percent of the total area within FOV is shown in Figure 2. This melting curve has some abrupt fluctuations of snow cover area percentage caused mainly by changes in visibility due to weather conditions.

Figure 2. Time series graph for snow cover area as a percent of the total area .

I would like to thank Dr. Alexander S. Komarov for his contributions to data processing using MATLAB software.