Nitrate pollution caused by intensive agricultural activities has drawn increasing intention around the world over the past few decades (Liu et al., 2016; Milovanovic, 2007; Ongley et al., 2010; Sith et al., 2019; Van Meter et al., 2017). Nitrate pollution is threatening the health of receiving water bodies leading to hypoxia or eutrophication of rivers, lakes, and estuaries, as well as the deterioration of groundwater. In Prince Edward Island (PEI), the degradation of surface water and groundwater quality has been found to be closely associated with the high nitrate load from intensive potato production in the province (Benson et al., 2006; Bugden et al., 2014; Danielescu and MacQuarrie, 2011; Liang et al., 2019; Zebarth et al., 2015). Measuring these agricultural non-point source (NPS) pollution to waters is difficult due to the large variation of the uneven distribution of NPS over space and time within watersheds (Miller et al., 2017).

The Soil and Water Assessment Tool (SWAT) is a physical-based and semi-distributed hydrological model that was designed to simulate stream flow, sediment yield, nutrient and pesticide load and crop growth at watershed scale (Arnold et al., 1998). The SWAT model requires datasets of topography, soil, climate and land use as input for model setup. In the SWAT model, a watershed is divided into subbasins, then the subbasins are further divided into hydrologic response units (HRU) (Fig. 1) with homogenous soil, slope, land use, and similar hydrological characteristics (Ullrich and Volk, 2009).  A HRU is the basic calculation unit within the SWAT model. The SWAT model reports the values of different hydrological and chemical parameters on subbasin level by calculating the total amount or area weighted average of all HRUs within subbasins. The main channel output is calculated by integrating input to the channel with major channel processes. 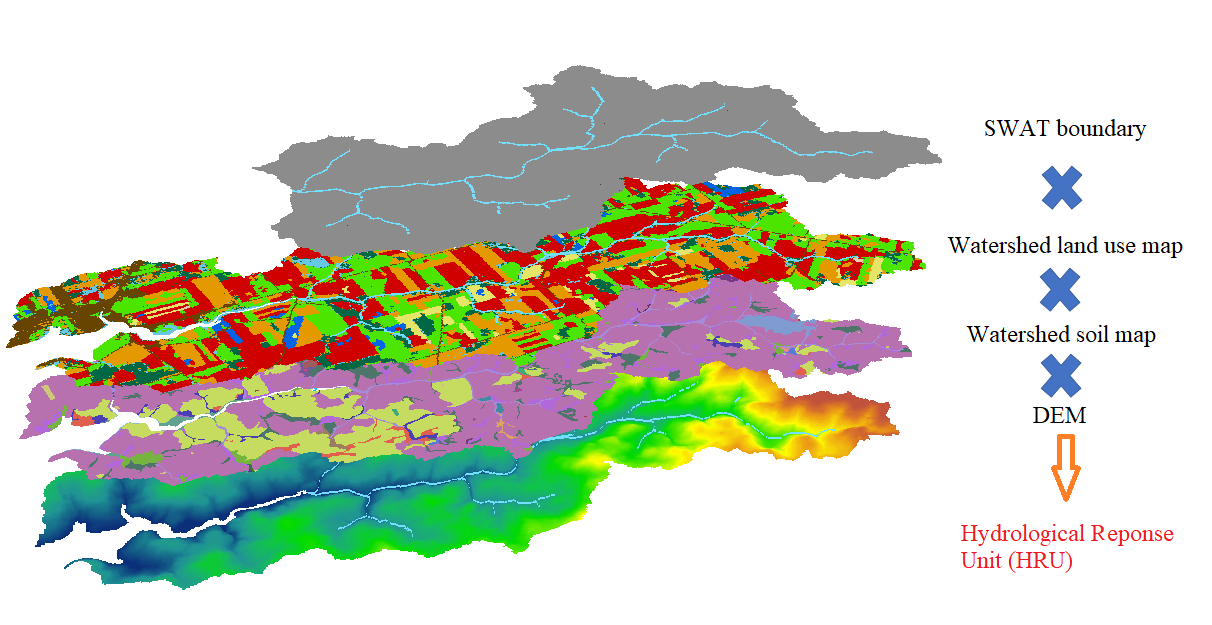 The Wilmot River Watershed is a typical agricultural watershed located in the central west part of Prince Edward Island (Fig. 2). The watershed covers an area of 61 km2 with over 70% of its land under agricultural production. With potatoes as the major cash crops, most of the landmass of the watershed has been under potatoes rotated with forages and grains. 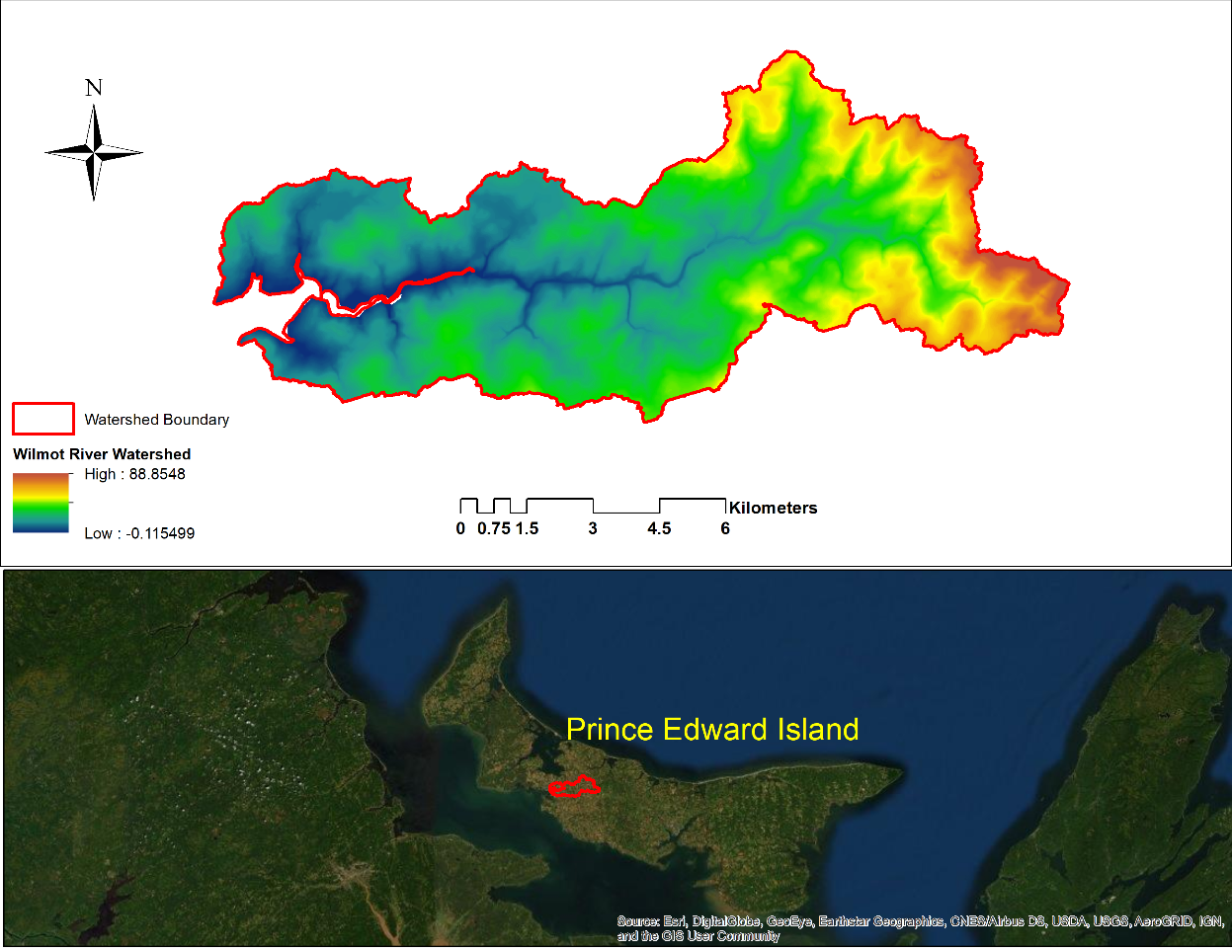 The SWAT model for Wilmot River Watershed was setup using soil, DEM, climate, and dynamic land use data of the watershed for the period of 2011-2017. Daily streamflow and stream nitrate load calibration were performed using the SUFI-2 algorithm in the Soil and Water Assessment Tool Calibration and Uncertainty Procedure (SWAT-CUP 2012) software package (Abbaspour et al., 2015). Baseflow and snow melting parameters were calibrated for stream flow and the fitted values are shown in Table 1. Nitrogen parameters calibrated for nitrate load are summarized in Table 1. A 3-year warm-up period (2008-2010) was used to stabilize the model and the model was calibrated from 2011 to 2013 and further validated from 2014 to 2017. The SWAT model performed well in predicting both daily stream flow and nitrate load according to the criteria recommended by Moriasi et al. (2007).

It has been well documented that nitrate losses from agriculture landscape are different between growing and non-growing seasons (Cicek et al., 2015; Jiang et al., 2011; Liang et al., 2019; Woli and Hoogenboom, 2018; Zebarth et al., 2015). As discussed above, nitrate load to streams was primarily contributed by groundwater discharge during growing seasons (summer and early fall). During non-growing seasons, especially in winter and early spring, nitrate loss was enhanced with concentrated runoff as a result of snow melting events. The most dramatic increase of nitrate load from growing season to non-growing season occurred in subbasins 32, 33, 34 and 35, which are located in the southwest part of the watershed. Nitrate load of these four subbasins almost doubled from growing season to non-growing season. The total area of these four subbasins account for 14.1% of the total area of the watershed while they contributed 28.7% of the total nitrate load during the non-growing season. Furthermore, these subbasins are also close to the watershed outlet, more nitrate export coupled with less travelling time would make these subbasins pose higher threats to the aquatic environment of the estuary compared with other subbasins. Identifying these heavily polluted areas would provide critical information for land management and pollution control. Wagena and Easton (2018) pointed out that targeting critical source areas would achieve almost the same results as widespread targeting for water quality protection. Therefore, under the present situation, more attention should be paid to the southwest part of the watershed. 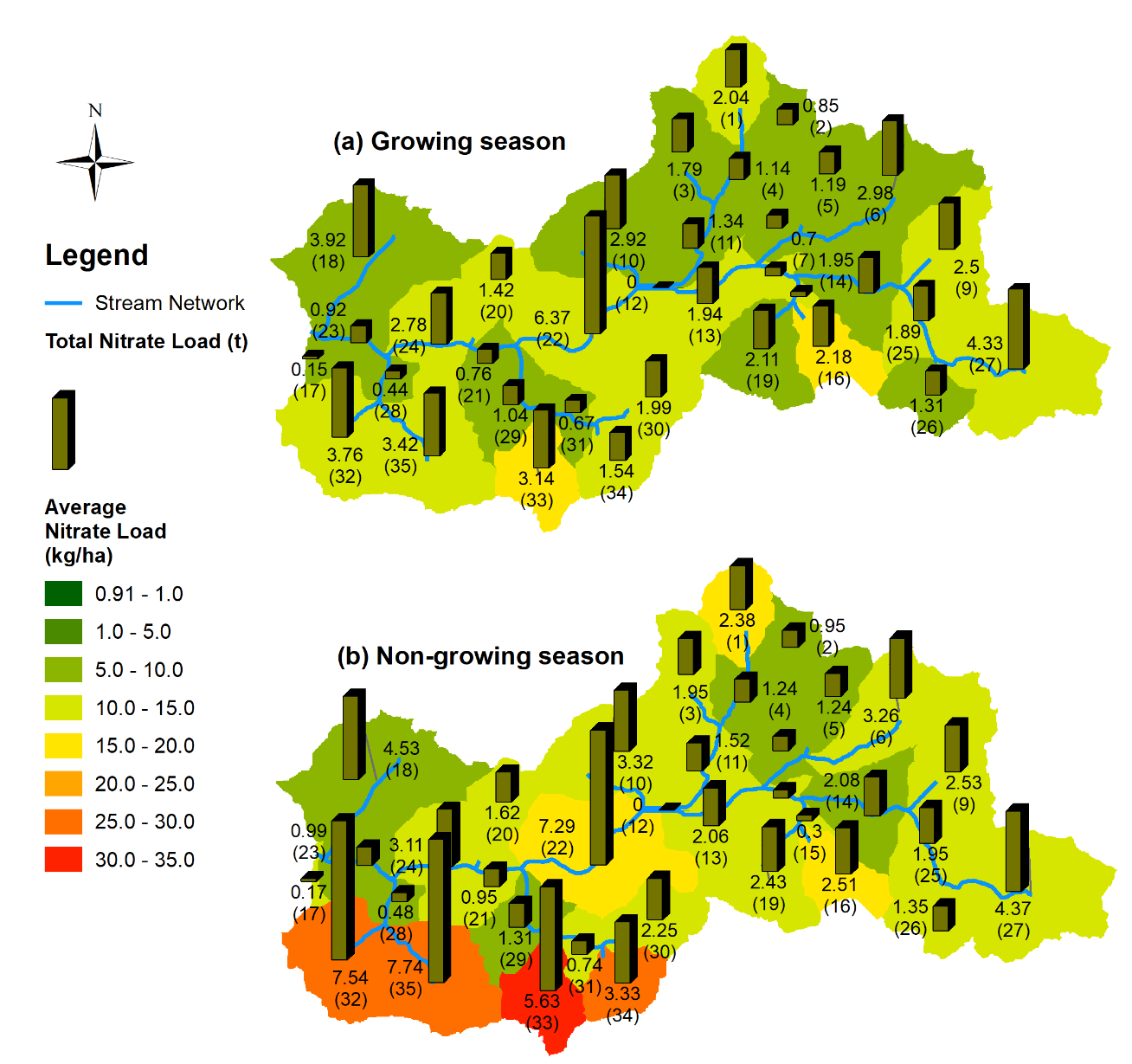 Ullrich A, Volk M. Application of the Soil and Water Assessment Tool (SWAT) to predict the impact of alternative management practices on water quality and quantity. Agricultural Water Management 2009; 96: 1207-1217.