GIS is often focused on those things that can be defined through hard lines, singular points and polygons. For me as a settler, my home can be easily defined by the boundaries of the state I am from and the edges of my house, this has been shaped by growing up with an understanding of what is mine and what belongs to others.

Throughout my years at the University of Victoria, nearly all of my courses in Geography and Environmental Studies have touched on the different world views of the local Indigenous Nations. In these world views humans and the natural world are one and territorial boundaries are much more blurred.

“The idea of being a care-taker is a reminder to the human being of our position on the Earth, that we are a part of the natural world, not a controlling element. The idea depicts no only moral, but also practical obligations. Just as the smallest insect plays an important role in its own ecosystem, and is an important element in the balance between separate ecosystems, so do human beings have their role” (Paul, 1995, p. ii). 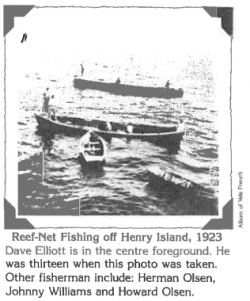 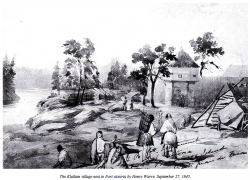 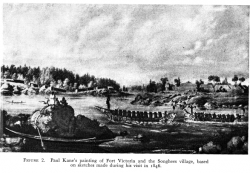 GIS has the potential to be an incredible tool to relocate Indigenous peoples onto a landscape they have been so effectively erased from by colonial cartographies. The following web map is one attempt at reimagining how GIS could be used to show the blurred boundaries and lands of Indigenous peoples by showing numerous layers of presence on the land since time immemorial through language, resource use and various misaligned boundaries drawn by numerous scholars.

The following is an except from a larger project exploring these ideas.

Language is recognized by Indigenous and settler scholars as vital to cultural resurgence (Antone, 2018). SENĆOŦEN and Lekwungen are two of the primary languages of the Coast Salish peoples of the Greater Victoria area. SENĆOŦEN is spoken by the W̱SÁNEĆ (also known as Saanich) peoples while Lekwungen is spoken by the Songhees and Esquimalt peoples. Philip Kevin Paul, a member of the W̱SÁNEĆ people describes the importance of language by comparing the difference between English and SENĆOŦEN, “the English language creates observers whereas the SENĆOŦEN languages creates participants” (Paul, 1995, p. 4). Language shapes our relationship with the world around us. For the Lekwungen and W̱SÁNEĆ peoples place-names not only function as an identifier of location but contain embedded meaning and story. For Paul, “the Saanich place names contain my people’s history, values and ideologies” (Paul, 1995, p.6).

These deeply meaningful place names present the opportunity to represent territory without hard lines and boundaries. The SENĆOŦEN place-names come from Dave Elliott Sr., a W̱SÁNEĆ elder, in his work, Saltwater People published in 1983. The Lekwungen place-names come from a variety of ethnographic sources written from the late 1800s until present, no single mapped source of Lekwungen place-names exists. While these place-names, their translated meaning and as much description as possible is included, they are just a start to building a holistic picture of territory.

Another important aspect of Indigenous ways of life that can be mapped using point and polygon data is resource use. Using different colours for the W̱SÁNEĆ and Lekwungen locations makes the overlap in territory and use visually clear. Some language and territory boundaries were included, and represented by dashed lines, to demonstrate the ambiguity of these hard lines. Depending on the author or scholar where these boundaries are located changes. These mismatched lines force us to call the idea of borders and boundaries into question.

Another vital part of relocating Indigenous peoples back onto the landscape is through story, the following are a few examples of the stories connected to different locations mapped above.

The Story of the Saanich People

Once, long ago, the ocean’s power was shown to an unsuspecting people. The tides began rising higher than even the oldest people could remember. It became clear to these people that there was something different and very dangerous about this tide.

The sea waters continued to rise for several days. Eventually the people needed their canoes. They tied all their rope together and then to themselves. One end of the rope was tied to an arbutus tree on top of the mountain and when the water stopped rising the people were left floating in their canoes above the mountain.

It was the raven who appeared to tell them that the flood would soon be over. When the flood waters were going down, a small child noticed the raven circling in the distance. The child began to jump around and cry out in excitement, “NI QENNET TFE W̱SÁNEĆ” – “Look what is emerging!” Below where the raven had been circling, a piece of land had begun to emerge. The old man pointed down to that place and said, “That is our new home, W̱SÁNEĆ, and from now on we will be known as the W̱SÁNEĆ people.” The man also declared, on that day, that the mountain which had offered them protection would be treated with great care and respect, the same respect given to their greatest elders and it was to be known as ȽÁU,WEL,ṈEW̱ – “The place of refuge.” Also, arbutus trees would no longer be used as firewood.

SṈITȻEȽ is the place of blue grouse. It was understood by my people that the blue grouse would only occupy a place if the land was very rich. SṈITȻEȽ, the land around Tod Inlet, was an important fishing and hunting site, since it is the only area within my people’s winter movements that offered protection from the southwest wind, the most vicious wind in Saanich.

SX̱OX̱IYEM is interpreted as “still waters” and is one of many names that have scientific relevance. “Still waters” depicts my people’s version of what modern scientific research has verified to be true about Saanich Inlet: that it circulates slowly and rarely flushes out. SX̱OX̱IYEM is located near Tod Inlet.

In the time the Creator was on the Earth, a bear stood looking out across the inlet. Instead of just going across, he stood there, trying to decide whether he should or not. The Creator saw this, of course, and changed the bear into a boulder. He said to the bear that he be ashamed of himself. The Creator had given him a strong body and thick coat for protection and warmth. He should not have hesitated to do something that he had to do and should not have been lazy. This is why the Creator changed him, saying, “The people will remember what you have done and why you have been changed.” He made an example of the bear whose name is SPÁEŦ.

REFERENCES
(including those used in the larger project)

Kyem, P. A., & Saku, J. C. (2009). Web-Based GIS and the Future of Participatory GIS Applications within Local and Indigenous Communities. The Electronic Journal of Information Systems in Developing Countries, 38(1), 1-16.

Pacey, H. A. (2005). The benefits and barriers to GIS for Māori (Doctoral dissertation, Lincoln University).

Paul, P. K. (1995). The Care-Takers: The Reemergence of the Saanich Indian Map. Sidney, BC: The Institute of Ocean Sciences.