This spotlight article is from Taylor Anderson, currently in her second year as an ECCE student associate at SFU. Recently, she participated as a member of the SFU team in the ECCE App Challenge 2017 to produce a custom solution using citizen-sourced data to help identify places areas in need of sustainable transportation infrastructure. In her article below, Taylor describes her recent work at SFU with a model for simulating a new bio-control strategy that will be used for eradicating Emerald Ash Borer infestations.

My name is Taylor Anderson and I am a PhD student in the Spatial Analysis and Modeling (SAM) Lab in the Department of Geography at Simon Fraser University, British Columbia, working with Dr. Suzana Dragicevic. I have been an SFU ECCE member for two years, an experience that has afforded me many learning opportunities including attending the Esri Developer Summit 2016 and participating in the nation wide Esri App Challenge 2017. I have also been a part of the Esri user research community, attending and presenting our research at Esri Canada User conferences in Toronto, 2014 and in Vancouver 2015 and 2016.

My research focuses on development of geosimulation models using GIS and geospatial data to better understand the spatial and temporal dynamics of invasive beetle species and their interactions with forest environments. Particularly I was studying spatio-temporal patterns of emerald ash borer (EAB), the Agrilus planipennis, a native species to several countries in Asia. The EAB was introduced into North America in 2002 through the shipment of infested wooden crating. The EAB infests and kills North American ash trees and has nearly wiped out all ash tree species in Ontario, Quebec, and several states across central US. Not only has the beetle caused extensive economic and ecological damage, but the loss of trees on privately owned properties, in parks, and along streets has social impacts as well. Born in Toronto, Ontario, this infestation literally hits close to home for me. Unlike its native environment, the beetle lacks predators in North America, and as such EAB infestation has been particularly difficult to control and eradicate putting several other provinces and states at risk.

Native predators of EAB include three different species of a stingless wasp, a parasite that produces offspring that feed on the EAB larvae. This summer, 2017, Canadian researchers plan to release the Tetrastichus planipennisi in 12 areas in Ontario and Quebec as part of a biological control program (The Globe and Mail, 2017). Understanding the impacts of the stingless wasp on the EAB population using field studies will take years. Therefore, GIS and geosimulation models can be used to both simulate EAB and wasp dynamics and to optimize wasp release strategies. The EAB-BioCon model was developed and tested as a GIS-based agent-based model capable to simulate EAB-wasp interactions using datasets available from the City of Oakville, Ontario from 2008 to 2009 (Anderson & Dragicevic, 2016 a, b). Figure 1 shows (A) the location of the study area used for the simulation and (B) the real-world location of ash trees in Oakville, and the severity of EAB infestation in 2009. Figure 2 presents the simulated spatial patterns of spread over time for both the wasp and the EAB for the months of (A) May, (B) June, (C) July and (D) August 2009. 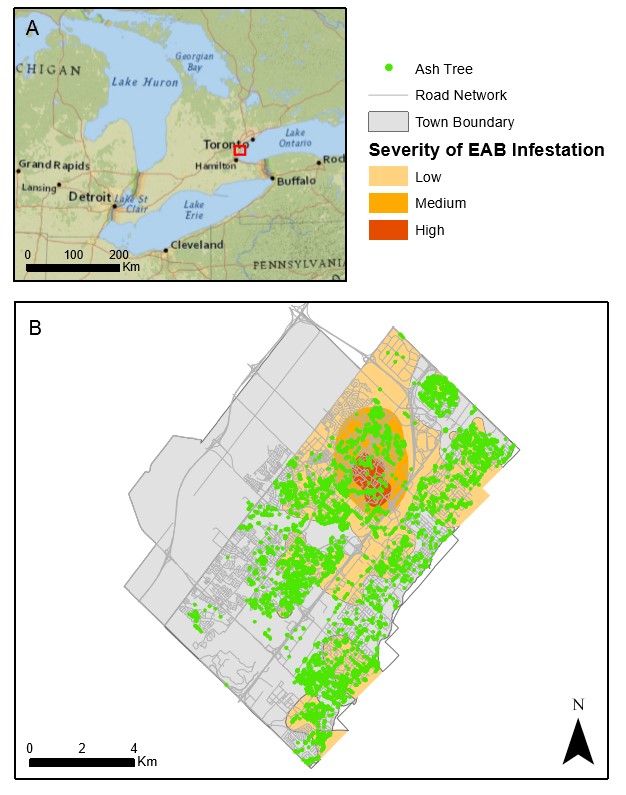 Figure 1. Study area for the EAB-BioCon Model (modified from Anderson & Dragicevic, 2016a) 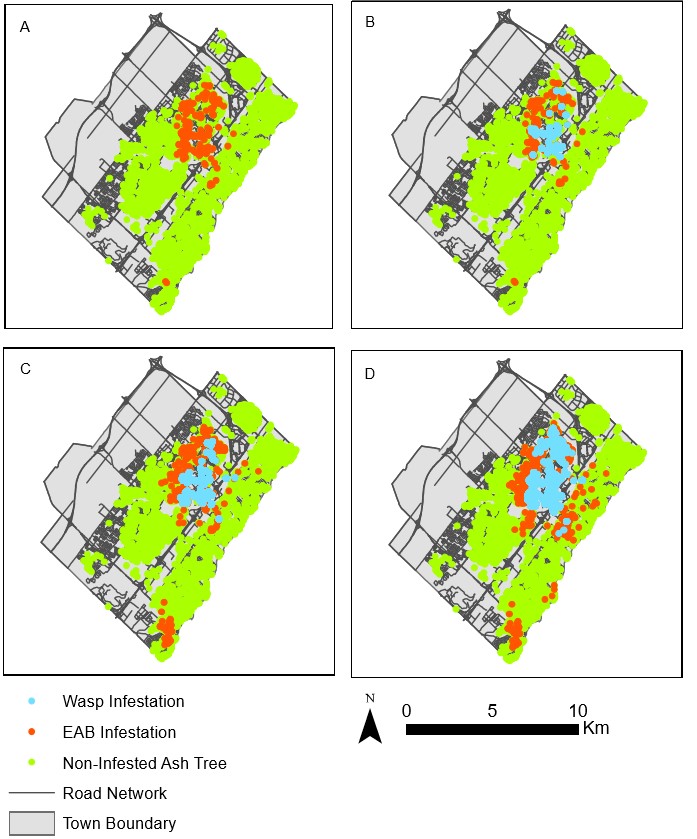 The EAB-BioCon model seeks to understand how variations in release strategies including the number of wasps released, the timing of release, and the number of release points impact EAB populations. Model results indicate that these three factors play a role in reducing EAB populations and that EAB populations are reduced at greater rates when an increased number of wasps are released, at multiple locations, before EAB adults emerge from the larval galleries in early June. The developed GIS-based geosimulation model can be used as a virtual laboratory that is an inexpensive, faster, and less damaging to trees than field experiments. The model is useful to biologists and forest and pest management to explore possible scenarios of biological control, dispersal behavior of both the EAB and TP species, the dynamics between them, and potentially prevent unnecessary extinction of the susceptible trees prior the real infestation spread.