This year, 23 students from around the world won an Esri Young Scholar Award for their exemplary work in geospatial sciences. The prize included a trip to San Diego for the Esri Education GIS and Esri User Conferences. For Shane Furze, the 2015 Esri Young Scholar from Canada, attending the UC for the first time was exciting – and a bit overwhelming.

Since 2012, university students around the world who use GIS in their research have had the opportunity to compete for the Esri Young Scholar (EYS) Award in their country or region. The results from this year’s competition in Canada were announced in a blog post and Map Journal in May – but for the winner of the competition, that was just the beginning!

The prize for EYSs is a trip to San Diego for the Esri Education GIS Conference and the Esri User Conference. Shane Furze, Canada’s 2015 EYS, was a bit amazed to learn how many people are interested in the Esri UC: attendance at the UC in 2014 was over 16,000 – or more than 1.5 times the total enrollment at the University of New Brunswick, where Shane is a student.

After he returned from San Diego, and had a chance to recover, I interviewed Shane via email to learn a bit more about him, his work and his impressions of the UC.

KA: What are you studying at university and why did you choose that field?

SF: I am a third year PhD student studying Forestry at the University of New Brunswick in Fredericton, New Brunswick. I had always spent time outdoors with my father while growing up in New Brunswick and it was from this experience that I realized I wanted to study environmental science and forestry. I had completed my BSc in Environmental Science and Biology at St. Francis Xavier University before making my way back home to further my studies at UNB. It was here where I was introduced to GIS while working on my Master’s degree in Environmental Management.

KA: What are you hoping to do after graduation?

SF: I have yet to decide what route to take next upon completing my PhD. I haven’t decided if I want to continue with school or seek out a career in the private industry. I am hoping I can find my dream job, conducting both GIS analyses and fieldwork on natural resources wherever this may be in the world. I’ll have to wait and see where the next door leads…

KA: The project that you submitted for the EYS competition is titled Enhancing Digital Elevation Models (DEMs) for Improved Soils Mapping. Can you tell me a bit more about it?

SF: This project focuses on enhancing open-sourced Digital Elevation Models (DEMs) through weighted regression analyses with LiDAR-derived elevation datasets. Due to the coarse resolution (ranging between 30 and 90m) and absolute error associated with existing open-sourced DEMs, topographic data sets and resulting derivative maps created from these models contain many errors embedded throughout. By combining the open-sourced elevation datasets and comparing with fine resolution maps (LiDAR), an enhanced DEM with 10m resolution was derived, increasing the conformance within +/-2m of “true” elevation from 43% to 74% for New Brunswick, Canada. This updated elevation model along with both historical soils data and sample plots spanning the province will be utilized to disaggregate existing soil maps into continuum maps of soil attributes at fine resolution. The results generated will be applied to productivity analyses to determine the health and sustainability of plantation management in forestry. 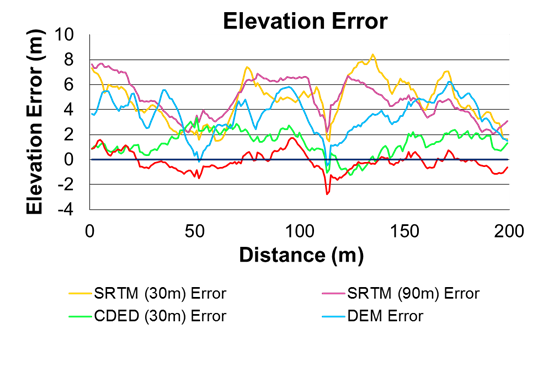 KA: What were your overall impressions of the Esri UC and Education GIS conference?

SF: I was overwhelmed and very pleased to have learned that I had won the Esri Young Scholar for Canada award. Once in San Diego the fact that I had won finally kicked in! It was my first time in San Diego and it is a great city with both wonderful people and scenery. Both the Education and User Conferences were of great value to me. Also, the venues were excellent. I was slightly taken aback once I had walked into the main conference room to listen to the plenary presentation by Jack Dangermond and scanned the room. Let’s just say there were a few attendees…

KA: Were there any sessions that you found particularly useful or interesting?

I appreciated the talks and sessions regarding both spatial analyses and Python scripting since both are directly related to my project. During breaks between presentations it was great to have the opportunity to pick the minds of some Esri staff with questions regarding issues I have been having with both software and my project. I was also fascinated by the talks,  displays and promotions of ArcGIS Pro. Although I have yet to have the opportunity to delve into this program, it looks to be a great tool, promoting both efficiency and processing capabilities.

KA: You were one of 23 Esri Young Scholars this year. How did you feel meeting other students from around the world?

Meeting the other Young Scholars and award recipients for the first time was exciting! I did not realize how many students there were going to be. It was great to have the opportunity to talk to them and learn about their projects with GIS. I was fascinated by all of the different facets of the GIS world presented during the poster session by both the young scholars and other attendees. The majority of my research is directly related to forestry and natural resources so seeing posters and presentations on unrelated topics gave me a much deeper appreciation for both GIS and the community surrounding it. This also gave me a different perspective when viewing my own work which is always welcome!

KA: Is there anything else you’d like to add?

I am very pleased to have received this award and to have the opportunity to experience San Diego and the Esri Education and User Conferences. I would highly recommend these events for anyone working with GIS whether you are a student or a professional. It’s a great educational and networking experience.

Most importantly, I cannot thank the Esri Canada staff and Dr. Brent Hall for making all of this happen. Your assistance and hospitality is greatly appreciated! You all made the trip a much better experience for me. Thank you.

Shane Furze, Canada’s 2015 Esri Young Scholar, with his award and poster at the Esri User Conference in San Diego.

Congratulations, once again, to Shane for winning the Esri Young Scholar Award. If you want to find out about the other 2015 Esri Young Scholars from around the world and see their work, read the GIS Education Community blog post and story map.