Earlier this month, we were back in California for the Esri User conference in San Diego with members of our Education and Research group and others from Esri Canada, and about 600 attendees from Canada. Among those were over 40 students and faculty/staff attending from education institutions across Canada. The conference itself hosted over 17,000 attendees, and presented 220 paper sessions, 342 technical workshops, 223 demos, and 226 exhibitors (check the Esri UC blog on GeoNet for full stats). The theme for the UC this year that was highlighted during plenary was ‘The Intelligent Nervous System’. This theme emphasizes that GIS and geospatial infrastructure are powering the continuous evolution of our understanding of the world, acting as an intelligent nervous system that connects us and allows this evolution to happen in real time, using geography to bring it all together. Essentially, we as users are creating a global nervous system through our collective efforts to capture, visualize, and analyze data. GIS helps us see the complexity, relationships, and patterns of challenges throughout the world, and as users, we form an intelligent network that is responding to these challenges. In addition to the ~17,000 attendees at the conference in San Diego, over 23,000 people tuned-in to watch the live-steam of the plenary. If you missed it, you can view the plenary video series online.
Throughout the plenary, many of the newest features of the ArcGIS platform were demonstrated. One of these was the next generation of ArcGIS StoryMaps, which brings a new modern experience for creating story maps that are interactive and engaging.

Among the featured stories and presentations during the plenary from the GIS user community, an interesting example was NatureServe’s effort to map biodiversity data across the United States, and make these data accessible to engineers and planners so that they can minimize impacts of new construction, development, and land management on endangered species. Another example showed how a group of junior high school students from schools in Lurgan, Northern Ireland used GIS to map actual and perceived effects of sectarian segregation within their community, and to facilitate reconciliation outcomes. It was very interesting to see how much the students could accomplish using ArcGIS to perform their mapping and analysis – you can view their storymap online.

Two keynotes were presented at the plenary. The first was by Ambassador Stefano Toscano, who talked about the efforts by the Geneva International Centre for Humanitarian Demining (GICHD). He provided a detailed picture of the persistent dangers and loss of life due to mines left over from conflicts throughout the world, and the many challenges faced by the GICHD in their efforts. He then presented how the GICHD uses GIS to help map the location of mines, prioritize locations to be cleared, and manage their work as effectively as possible. The second keynote included Jane Goodall and E.O. Wilson, both well-known leaders in conservation and environmental advocacy. They engaged in a discussion with Esri’s President, Jack Dangermond, focusing on issues related to many of the global crises we currently face: climate change, shortages of freshwater, and collapse of ecosystems. E.O. Wilson highlighted the need for more research on biodiversity, considering that we currently only have knowledge of about 20% of all species on the planet. Jane Goodall, encouraged youth to take action and for all of us to face up to our global challenges. She reemphasized her argument that the mantra ‘think globally, act locally’ that many of us are familiar with is not helpful. Instead, she advocates that individuals should both think about and act on local issues in order to live more sustainably. A more detailed summary of many of the highlights of the plenary, as well as the rest of the UC can be found on the Esri UC blog.

There were a number of highlights throughout the week of the UC that were of specific interest to our Education and Research group at Esri Canada. Of course, we had our ECCE App Challenge winning team with us again. This year, it was four members of the team SpectaculAR from the University of Waterloo: Jaydeep Mistry, Juan Carrillo, Fraser King, and Manpreet Singh Chahal. Jaydeep took the stage during the series of lightning talks shortly after the plenary. He presented the app that his team created for their App Challenge project, and their long term goals to move forward with it to develop it as an application used for community engagement during the planning and design stages of new developments.

Jaydeep Mistry, presenting the SMART app during the lightning talks.

At the same time, our Esri Young Scholar winner for Canada, Caitlin Cunningham, was attending the Map Gallery reception, where the poster presenting her work studying population density vs. protected areas and biodiversity hotspots was on display. In addition to winning the EYS award, she has also received deserved attention for her recent and ongoing work mapping the massive archive of photos from space by Chris Hadfield (also featured recently in our blog). 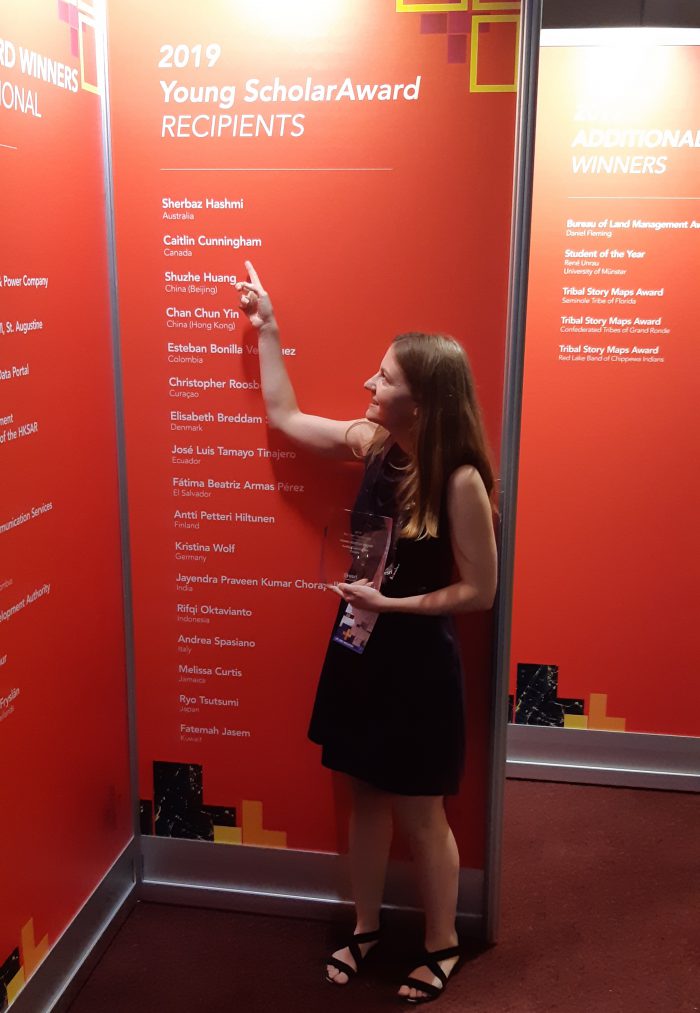 Each year, Esri issues a call for papers for a GIScience series to be peer-reviewed and published in a special edition of Transactions in GIS, and subsequently presented at the conference. Among the dozen excellent papers published in this year’s special edition of TGIS and presented at the UC was a paper by one of our own ECCE student associates from SFU, Alex Smith. His paper, co-authored with his advisor and ECCE co-director at SFU, Dr. Suzana Dragićević, presented a framework for using a four-dimensional agent-based model to simulate forest-fire smoke propagation. 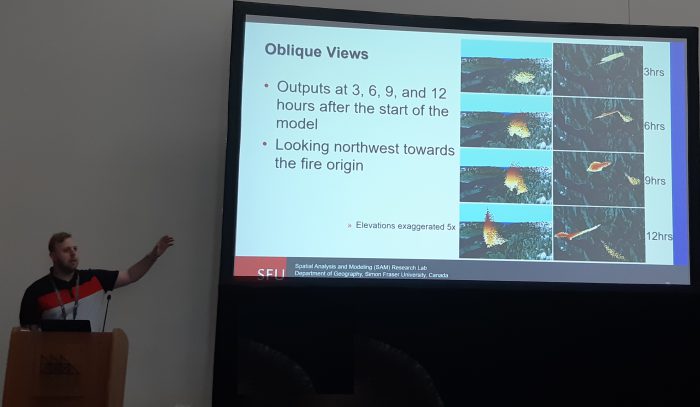 At Canada night, hosted by Esri Canada and open to all of the nearly 600 Canadian attendees at the UC, we celebrated the successes of our App Challenge and the EYS winners and enjoyed the opportunity to network with each other and many members of the Canadian GIS user community. Later in the week, we took the opportunity for photos with Esri Canada President Alex Miller and Esri President Jack Dangermond during Esri’s Special Achievements in GIS award ceremony. 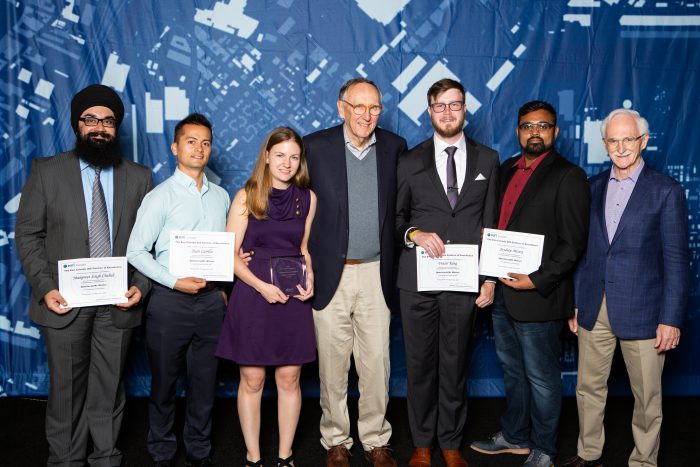 Overall, the conference was an excellent event for our education group and our special guests with many great experiences, networking opportunities, and learning opportunities throughout the week. We look forward to seeing more accomplishments from all of these students in the future, and are excited to see what’s in store for us again at the 2020 UC!