Just over a week ago, many of us from Esri Canada’s Education and Research group were present again at the world’s largest GIS conference in San Diego. The conference this year hosted over 17,900 attendees (including over 600 students), 198 paper sessions, 480 workshops, 237 demos, and 124 special interest groups (this year’s full stats can be found on the Esri UC Blog). The plenary that opened the week of the main UC set the theme for the conference: ‘Inspiring What’s Next’, and showcased advances in ArcGIS technology and its application in different industries. One example with Canadian roots was the presentation by J. D. Irving Ltd., demonstrating their use of the ArcGIS platform to support the company’s end-to-end operations for producing paper products, from raising seedlings and managing forest resources, to supply chain management and commercial market analysis. Advances in the technology were presented throughout the plenary (e.g., visualization techniques for exploring data in ArcGIS Online, ArcGIS Enterprise Sites for building tailored web sites powered by your Web GIS, and integration of AI and ML into your spatial analyses). A great example was the demonstration of Machine Learning analysis and prediction using the density-based clustering and forest-based classification and regression tools recently introduced to the ArcGIS Pro geoprocessing toolbox. The plenary concluded with a thought-provoking keynote by Juan Enriquez, Managing Director of Excel Venture Management, about the shift from natural evolution to ‘unnatural evolution and non-random mutation’ over the past 150 years as humankind has become the dominant force of change in the world, and the impact our geographic and genetic design choices may have on the future of the planet.

Issues related to conservation and climate were pervasive throughout the plenary and many sessions during the conference, alongside a shared vision that as GIS professionals, we are in a unique position to use technology to understand better the issues facing our planet and to drive positive change. An inspiring example from the plenary was the Plant-for-the-Planet Trillion Tree Campaign, presented by Felix Finkbeiner, who began an earlier initiative in 2007 to plant 30 million trees (which since led to 150 billion trees planted). This was followed by a well-received pledge from Jack Dangermond to ensure that the entire Esri User Conference will be made carbon neutral. Later in the week, those who attended the Esri Science Symposium saw Dr. Camilo Mora, from University of Hawaii, speak about the how a warming climate will affect our planet. Using maps showing 6 different harmful effects that will result from this trend across the planet, he illustrated that every location will be exposed to at least 3 of these effects within the lifetime of most audience members. While colourfully painting an alarming picture of what will happen if the current trend continues, Dr. Mora also offered insights into what measures may be taken.

There were several highlights of specific interest for our education group throughout the week. Some of us were present for the Education Summit in the days leading up to and through the start of the main UC, where members of the education community were engaged in a variety of workshops and user presentations. In attendance with us at the Education Summit was our own Esri Young Scholar winner, Anne Provencher St-Pierre from Memorial University of Newfoundland. She was invited along with the rest of the EYS winners to present her poster at the Map Gallery Reception during the main UC, and later to receive her award from Esri at the Special Achievements in GIS award ceremony. 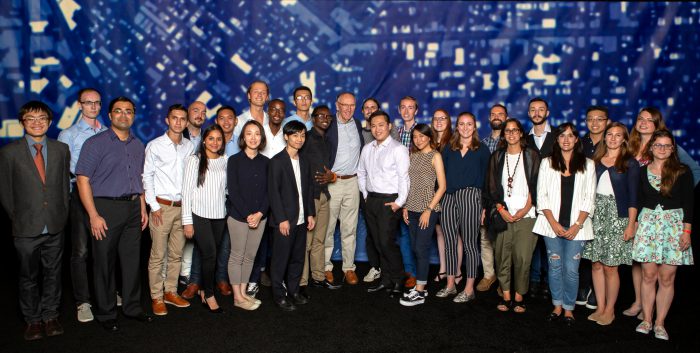 Esri Young Scholars at the SAG award ceremony (Anne is in the back row, third to the right of Jack Dangermond)

For the ECCE, we had a notable presence by way of our App Challenge winners from SFU, Anthony Lee, Alysha Van Duynhoven, and Chis Yee (a.k.a., mapit.space), who were awarded an expenses paid trip to San Diego to attend the UC. They had a chance to meet two of the judges from this year’s App Challenge who attended the UC (Ian Wint and Dr. Joseph Strobl). At the SAG award ceremony, the team received certificates acknowledging their achievement, and had a photo opportunity with Jack Dangermond. 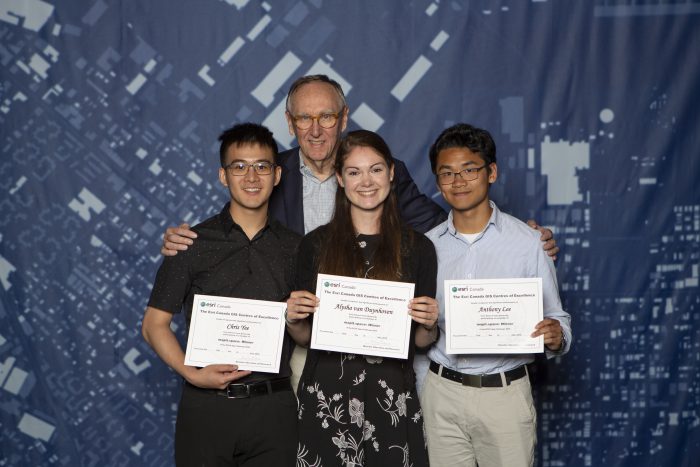 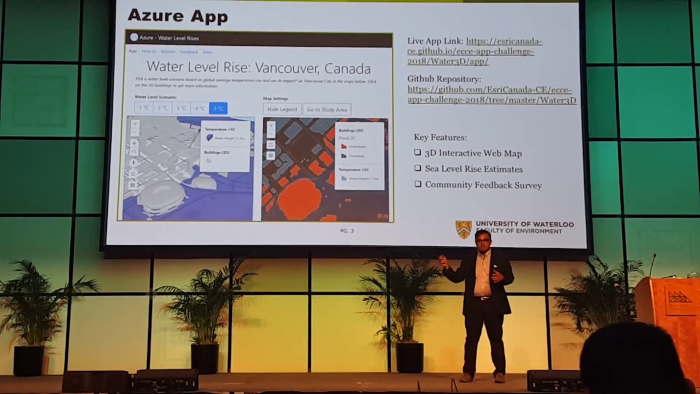 Members of both App Challenge teams were invited along all other Canadian attendees at the Esri UC to the annual Canada Night event hosted by Esri Canada. It was a rare opportunity for members of two App Challenge from across the country to meet each other, and share their experiences at the UC, and compare notes from their App Challenge projects. 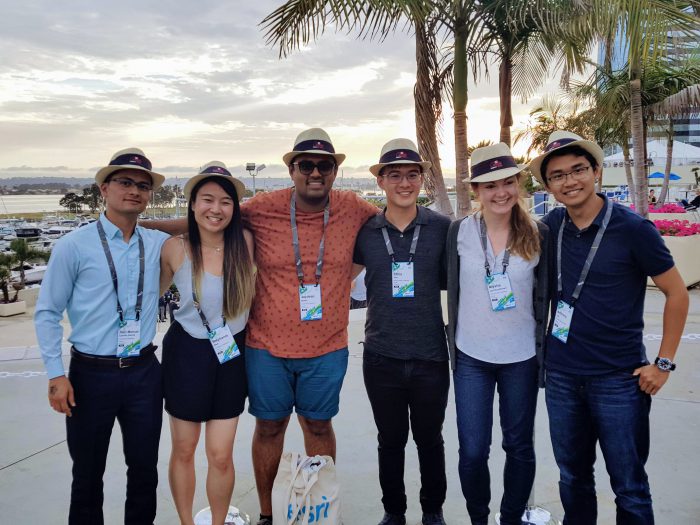 We are happy to have helped these excellent students make new connections and build valuable experiences during their week in San Diego, and look forward to seeing more great accomplishments from them in the future.

As a final note, it was great to see Dan Patterson from Carleton University (one of our ECCE schools) being acknowledged as a GeoNet Community MVP for being among the top three contributors in 2017 (for the second year in a row, in fact).