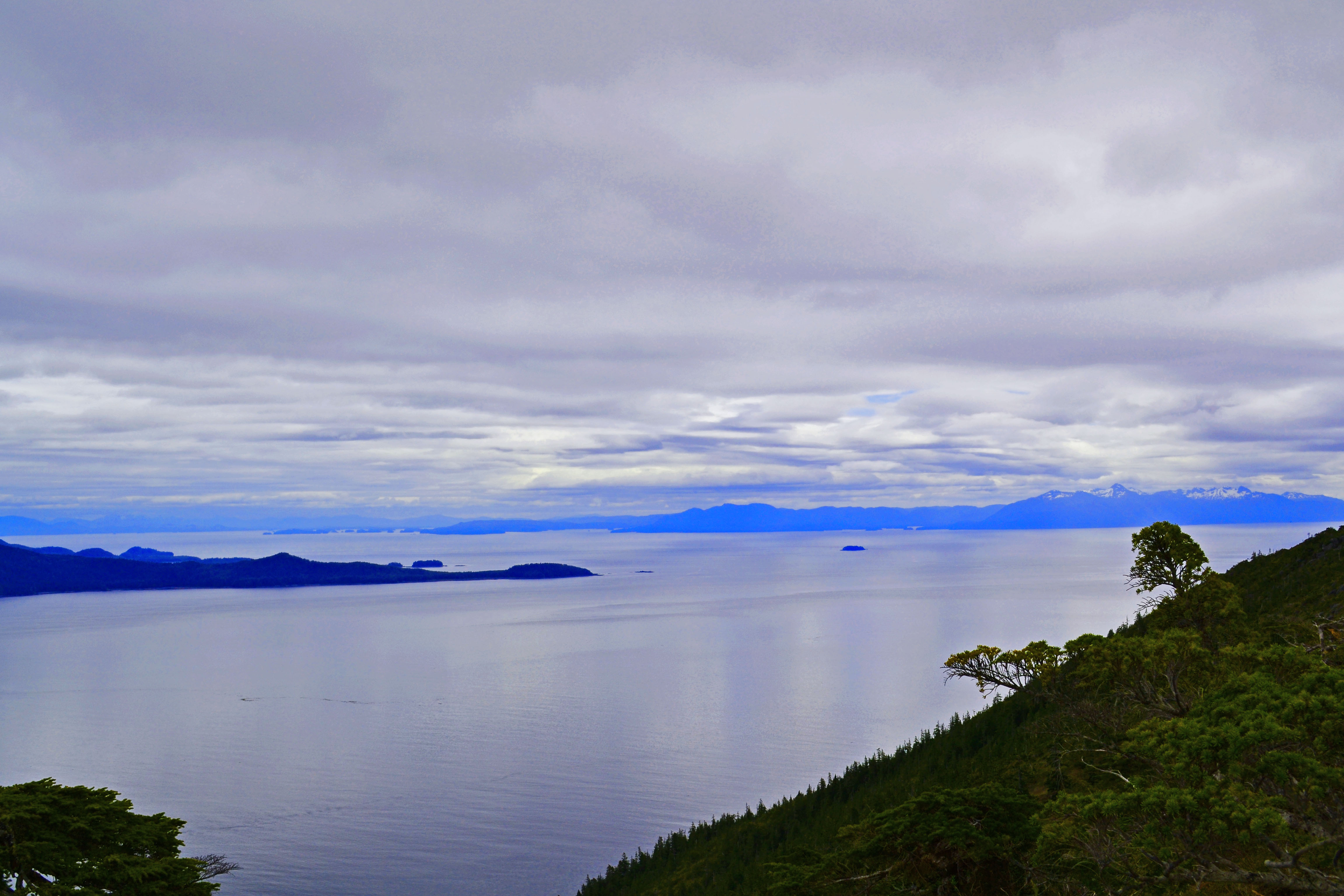 These past couple of months I’ve had the pleasure of working closely with the Alaska Whale Foundation (AWF) on both current and future research topics. AWF was founded in 1996 as a 501(c)(3) nonprofit organization dedicated to conserving Alaska’s marine mammals and their habitat through conservation and research. Since their beginnings in 1996, they have since established a research base in Southeast Alaska (more precisely Baranof Island) in Warm Springs Bay known as the Center for Coastal Conservation. Over the very short course of my stay at the station, I was involved in several different projects, two of which incorporated GIS into the base and analytical aspects of the project. So, allow me to tell you a little bit about one of the projects I was introduced into.

For starters, the key marine mammal studied at the Alaska Whale Foundation is the Humpback Whale (Megaptera noveangliae). These baleen whales are highly migratory and spend the summer months in productive cool waters in the North Pacific bordering British Columbia and Alaska. They primarily feed on larger zooplankton such as euphausiids and crab zoea, as well as small schooling fish (i.e. herring, mackerel, sand lance, capelin) (Baker et al, 1985; DFO, 2009; Neilson & Gabriele, 2016). The majority of these prey species make up dense prey patches where the whales can use a variety of feeding tactics to target the prey. Most may not already know, but humpback whales were hunted commercially throughout the 1800s until 1965 until they became internationally protected and enlisted as an endangered species (DFO, 2009). The global pre-exploitation population was estimated at over 120,000 individuals, and in the North Pacific alone had dwindled to approximately 1,500 following the whaling era (Gambell, 1976; DFO, 2009). Since then, they have made a remarkable recovery to 20,000 individuals in the North Pacific and growing at an annual rate of 4.9-6.8% annually. 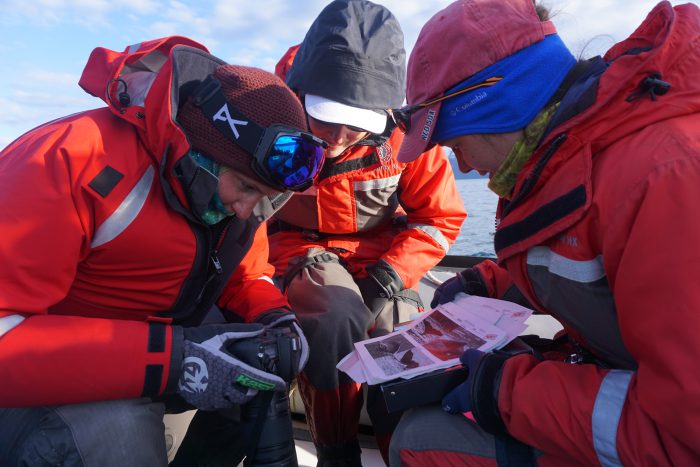 Unfortunately, the 20,000 whales that call Alaska home has also become an increasingly popular area for travel. Of the various vessel types that frequent Alaskan waters, cruise ship tourism is the fastest growing travel sector in the world (CLIA, 2010). There is now a growing concern of how these vessels contribute to the degradation of the marine environment. Impacts to cetaceans can occur through two primary mechanisms: the alteration of the underwater sound environment and through collisions (Harris et al, 2012). In either case, the proximity of the whale to the ship is crucial. The vast majority of collisions occur in coastal areas where the whales concentrate for feeding or breeding (Laist et al, 2001), or where there is habitat overlap and high levels of human traffic (Laist et al, 2001; Knowlton and Kraus, 2001; Panigada et al, 2006; Fonnesbeck et al, 2008; Vanderlaan et al, 2008). Humpback whales are the second most species affected by vessel collisions, particularly because they are long-lived and have low rates of reproduction (Laist et al, 2011). Adding to the already high vulnerability of the whales with vessel encounters, vessels require long distances to slow their speeds and avoid collisions, some requiring thousands of meters to alter their course (Silber et al, 2009). Cruise ships use the interconnected fjords of the southeastern panhandle of the state (“Southeast Alaska”) to access major ports of call, including Skagway, Juneau, Sitka, and Ketchikan (Harris et al, 2012). The interconnected fjords are also prime foraging habitat for humpback whales, which peak in abundance in the summer months May through September after migration from winter breeding grounds (Harris et al, 2012). The number of collisions in Southeast Alaska have been increasing at a rate of 5.7% annually from 1978 to 2011, which closely matches the annual growth rate of humpback whales (Hendrix et al, 2012).

Understanding the interaction between large ships and large whales has become a global conservation issue owing to the dramatic increase in commercial waterborne traffic in recent decades (Andrew et al, 2002; Ross, 2005), and the emerging issue of the deleterious impacts that large vessels may have on individuals and populations of whales (Gende et al, 2011). Separating whales and vessels in both space and time (Vanderlaan & Taggart, 2009; Redfern et al, 2013), or reducing vessel speed (Guzman et al, 2013) are two of the most common methods adopted to reduce collision threat to cetaceans. In some cases, the management approach to reroute vessel paths can be both feasible and effective. For example, in the Bay of Fundy, slight changes in routing of vessels can reduce the relative risk of collision by up to 62% (Vanderlaan et al, 2008). In other cases, however, this may not be an appropriate action to take, either because whale distribution may shift over time, or because ships may not be able to reroute around high-use whale habitat (Gende et al, 2011). Ship strikes can jeopardize the viability of small populations and are becoming an increasing conservation issue in Southeastern Alaska as the number and frequency of ships continue to increase in areas known to harbor humpback whales. To better improve humpback whale conservation a detailed analysis is required to: (1) explore the areas of overlap between Southeastern Alaskan humpback whales and vessel traffic, and (2) determine the collision risk and the degree of lethality to humpback whales in relation to vessel traffic. 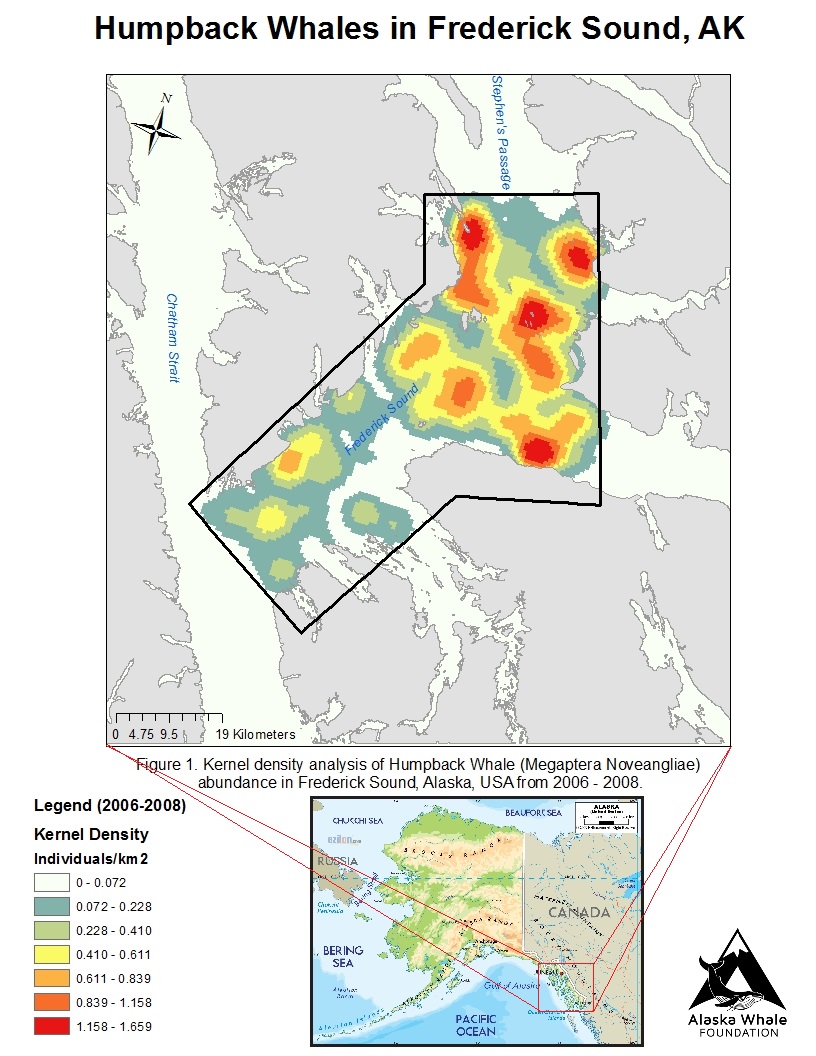 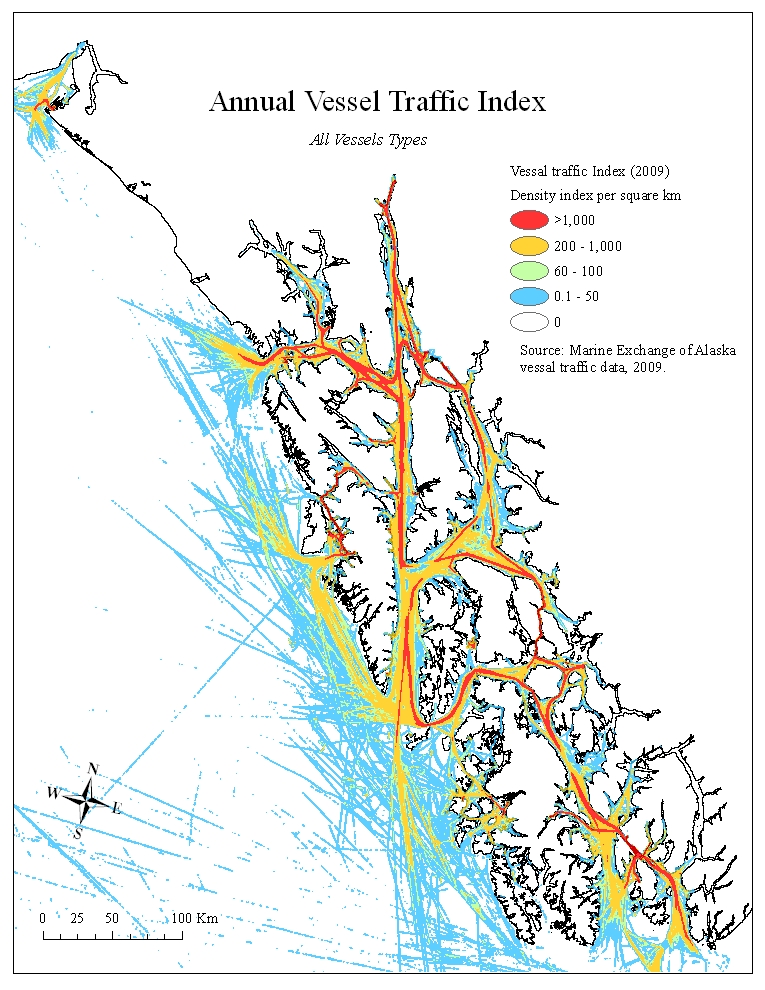 Annual Vessel Traffic Index of all vessel types in Southeast Alaska from the Marine Exchange of Alaska vessel traffic index, 2009.

And that’s just it, the Alaska Whale Foundation is attempting to better understand the spatial overlap of cruise ships in an area known to harbor a high concentration of humpback whales during the summer months. This pilot project could allow us to better understand the behaviour of these whales so that we can provide better conservation action for the animals potentially at risk in this area. The project is currently looking for funding to pursue future field research in the hopes to better understand the relationship between these elusive whales and the increasing number of vessels passing through the area. With the integration of GIS and statistical analyses we can provide both visual and sound statistics to help make the connection between two knowledge gaps. 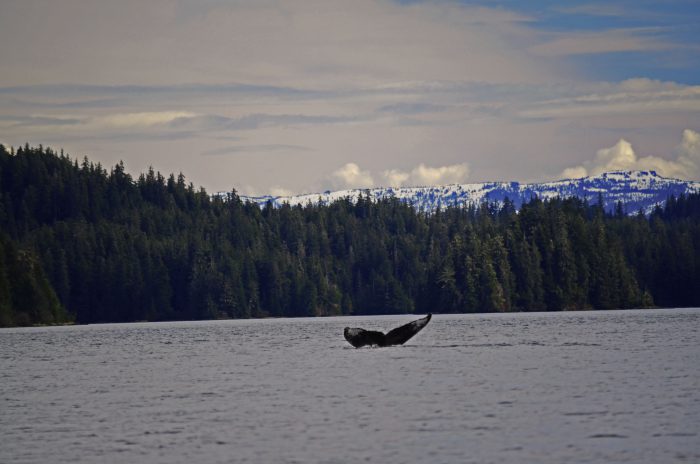 Humpback Whale fluke in Southeast Alaska right before it dives below the surface.

“I alone cannot change the world, but I can cast a stone across the waters to create many ripples.” – Mother Theresa