As a fourth year student at Carleton University, I am constantly finding myself thinking about what I want to do with my life when I am done school. What direction do I want to head in, how will I find a job, will I like my career? How can I integrate all the things I am passionate about in the academic field into a career? So I started to explore the internet, and I started to dive deep into what people, companies and countries are doing today.

Now, if I start from the beginning of things to help clear the air, I’ll tell you a little bit about myself. I am a biology major who found GIS in my second year and am hoping to have a career focused on aquatic (freshwater or marine) conservation. I am just as passionate about conservation and ecology as I am about GIS, and a key thing I realized is that I don’t want to lose my intellect or skills in either discipline. To my grateful surprise, I found that both biology and GIS are highly interconnected, and that GIS has become a useful tool in landscape ecology (the study of the abundance and distribution of organisms in their environment in relation to landscape structure). With the increase in available landscape data from satellite imagery and public agencies, GIS has become irreplaceable in the spatial analyses performed in conservation biology. I found that GIS has been used in projects like Gap Analysis, modeling species invasions, habitat connectivity, and the prioritization of land acquisition.

A particular project that strung my interest is called the Mannahatta Project that is funded by the Wildlife Conservation Society and the Center for International Earth Science Information Network. This project looked at the global influence of humans on the planet and found that: “83% of the earth’s land surface is influenced directly by human beings, whether through human land uses, human access from roads, railways or major rivers, electrical infrastructure (indicated by lights detected at night), or direct occupancy by human beings at densities above 1 person per square kilometer … It is within the approximately 17% of the earth’s land surface relatively less influenced by human beings that some of the best conservation opportunities lie. In these few places, conservation may be less hampered by conflicts and the targets of conservation may continue to thrive into the future. We call these areas, ‘Last of the Wild’” (NASA, 2017. Last of the Wild v1. Accessed through: http://sedac.ciesin.columbia.edu/data/collection/wildareas-v1). I found this project really interesting because it is demonstrating the direct impact that the human race is having on our planet. This was really only made possible through GIS, but allows conservationists to create action in areas that need it most and will benefit the most. 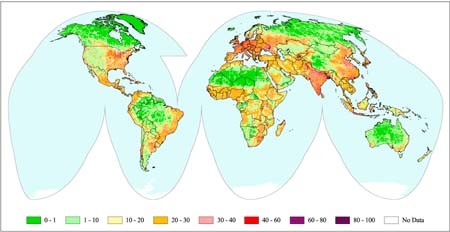 Reading more into GIS and Conservation biology, I noticed that almost everything I could find was related to landscape geography and biology (granted there is more data for that field), but what about the waterbodies of the world that cover 71% of our planet? We know so little about our aquatic environment that we can’t even measure the scale to which we are having an impact on it. So much of what we do every day goes into our waterways and in turn has an effect on the environment, and at this moment in time, we may not know the damage we have done until it has already passed and there may be nothing we can do about it. I think it would be phenomenal if we could somehow create a “human footprint” for the ocean, using GIS. We would be able to see the indirect effect were having on an environment we don’t pay attention too (ie. Carbon output, garbage, washing solvents down the drain etc). This would allow us to determine key areas that we may need to protect or allow use to develop new regulations for conservation.

This is just a thought post… that maybe one day I will pursue. What are your thoughts on the medley of conservation and GIS?