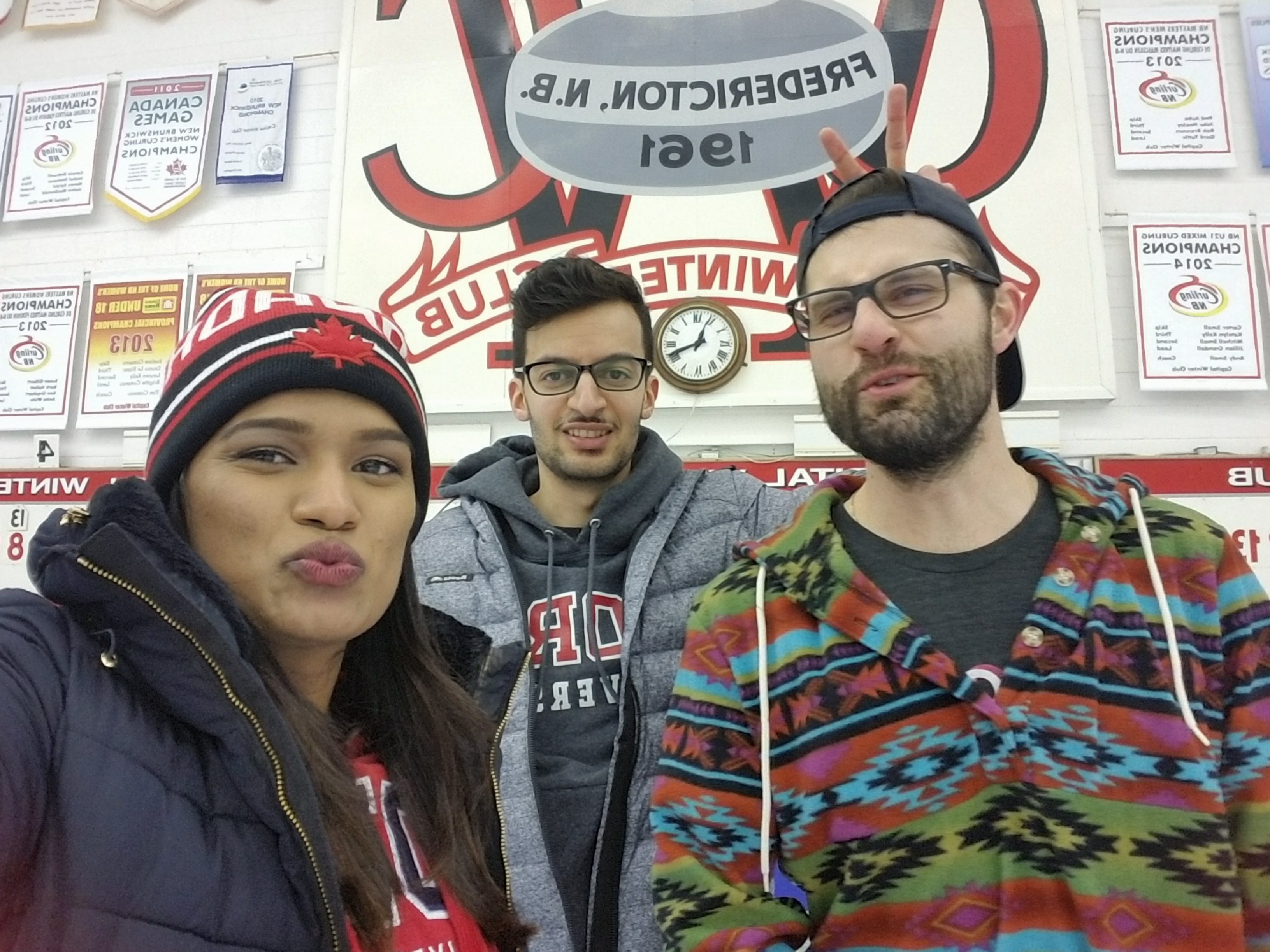 From Left to Right: Patricia Dhup, Ario Hadian and David Recchia. After the competition, we got the chance to have some fun and enjoy a Canadian classic, Curling.

The competition began at 8:00 AM on the Saturday and the problem was disclosed to us.  The place of interest was Karonga, an impoverished township lying in North Malawi.  It is an area that has a barely functioning economy, no maintained control networks, and prone to earthquakes and flooding.  Each of the team’s proposals must address 4 main issues:

We had about 6 hours to come up with a viable solution that addresses all four of the issues while considering other constraints, such as the budget and longevity of the proposed project.  My team and I were a bit overwhelmed at first — there was a lot to cover.  However, we rose to challenge and powered through it.  In the end, we developed a solution that we were all proud of. 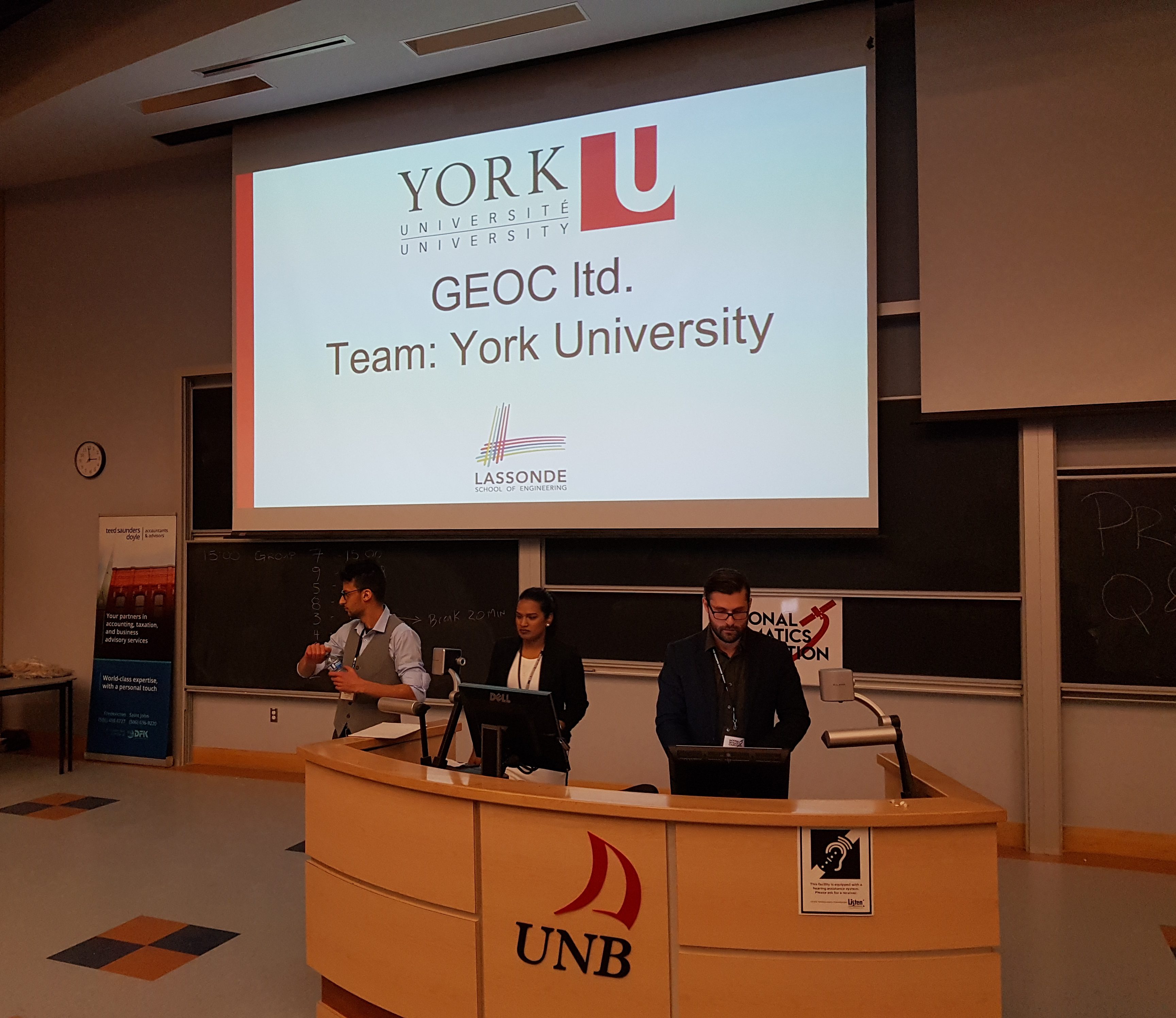 Preparing ourselves for the presentation.

The six hours flew by quickly.  Of course, we could have used more time to refine our proposal, however, this was part of the whole experience.  Balancing what was more important to mention in the 15 minutes we had to present was one of the biggest challenges.  Eventually it was our time to present, and we were ready.  Having gone through the presentation just once before we had to present, we got through it with no problems.  Since we were the first to go, we were able to watch our competitor’s proposals and witness some really great ideas and presentations.  Once everyone presented, the competition was finished.  We all dispersed back to the hotel, exhausted from the day.  Later that night, we all met back at the Capital Winter Club to have some fun and participate in a Canadian classic, Curling.  The night was much needed and we definitely enjoyed ourselves. 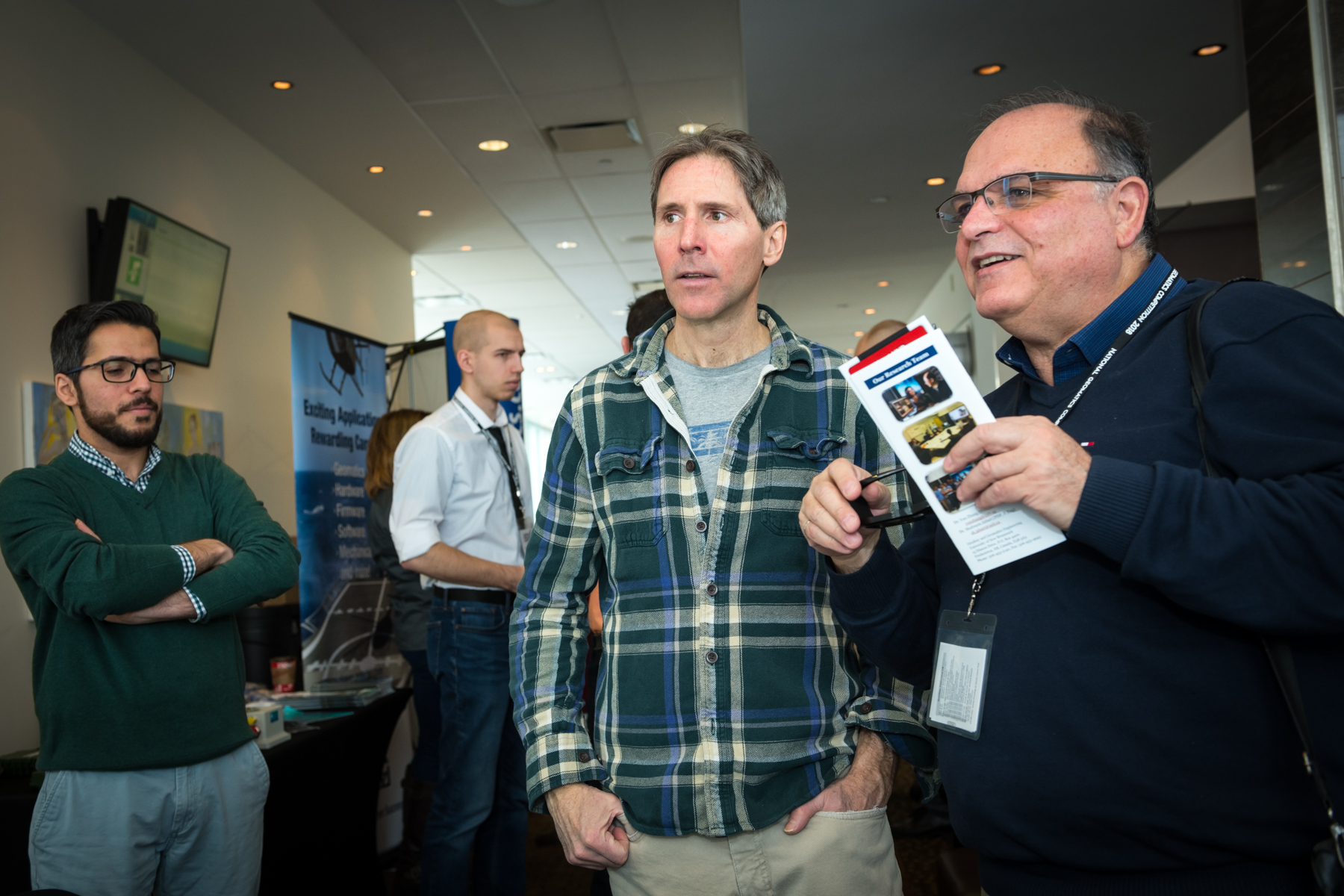 York University’s Dr. Costas Armenakis enjoying some of the exhibits during Sunday’s conference.

Sunday was a busy day, there was a conference held for us that included a few geomatics related companies and several keynote presentations from outstanding members working in geomatics.  This included Dr. John McLaughlin, president emeritus at UNB who has had an outstanding career and impact in our world of geomatics.  It was great way to wrap up the weekend.  Later that evening, we rejoined for dinner and sat with Dr. Peter Dare, the chair and professor for the Geodesy and Geomatics Engineering program at UNB, and two members of the NGC team.  Eventually, the winners of the competition were announced and, although we were a bit a disappointed in losing, we agreed their wins were well deserved.

Overall, the weekend was a great success.  My team and I learned some valuable lessons and were able to experience the pressures of producing viable solutions under a time constraint.  It is important for students to participate in events, such as the NGC, in order to help supplement their coursework.  Learning in the classroom should not be the entire experience — it should also consist of engaging with other industry leaders, collaborating with your peers and getting out of your comfort zone.  We are all grateful for the opportunity to be part of the first ever NGC and want to thank Lassonde School of Engineering for their financial support and to our professors.  I also want to take this opportunity to recognize the efforts of the NGC organizing committee and say on behalf of all of us here at York University, thank you.  Despite this being the very first NGC with very little to no existing framework to work with, you managed to pull off a challenging but rewarding competition that has set the benchmark for the future of the NGC.  We know it was not an easy task — all of you carried the responsibilities on top of your regular student responsibilities, which is no easy endeavour for anyone but especially a Geomatics student.  I also want to give a shout out to the winners of the competition — University of Calgary, University of Waterloo and University of New Brunswick — you brought your best and you all deserve it.  However, enjoy it for now because come next year, York University is bringing the heat to Calgary.