This is a guest post by Cam McCulloch, the 2019 recipient of the Esri Canada Higher Education GIS Scholarship at Simon Fraser University. 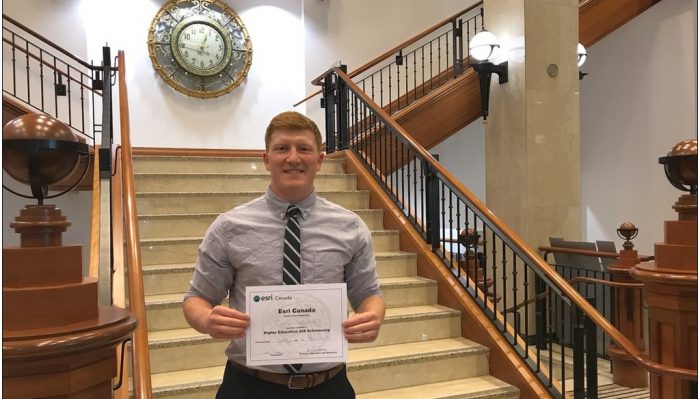 It was during my initial co-op work term that I had heard of GIS for the first time. I was working for a company trying to predict where mosquito populations would be highest based on historical abundance data. Needless to say, having had no GIS training (and a healthy dislike of mosquitos) I was a little troubled. Fortunately, I had knowledgeable and helpful colleagues who helped me first navigate ArcGIS and produce something that resembled a map. At some point during my struggle I had a revelation – I actually really liked what I was struggling with.

Before returning to SFU the following semester, I researched GIS courses offered at SFU and discovered the Spatial Information Systems Certificate. The SIS certificate program appealed to me because it provided evidence of my learning in a way that I felt was a little more meaningful to future employers than the courses themselves would have appeared. It would also give me the opportunity to learn about a variety of advanced GIS technologies and theories which were only briefly covered in my other science courses.

I took what I had learned from my first few courses in the SIS program and had the chance to immediately apply them in my next job with the Canadian Food Inspection Agency (CFIA). Before I knew it, I was one of the only people with any GIS abilities in the whole office, helping my colleagues prevent the spread of Japanese Beetle. I immediately put to use everything I had learned so far about creating appealing and informative maps, and the basic principals of spatial analysis – all learned during the first courses of the SIS program. My supervisors were thrilled to have me there, and I was happy to be able to practice my newfound skills.

Before I left SFU, I also wanted to gain some GIS research experience, so I decided to attempt a directed studies project. I approached Shiv Balram and he graciously agreed to supervise my research project, which examined how population expansion in Surrey, B.C. had impacted the surrounding vegetation. During the course of my project, I was able to gain a ton of experience using ArcGIS for image analysis, and created a final poster to display my findings. 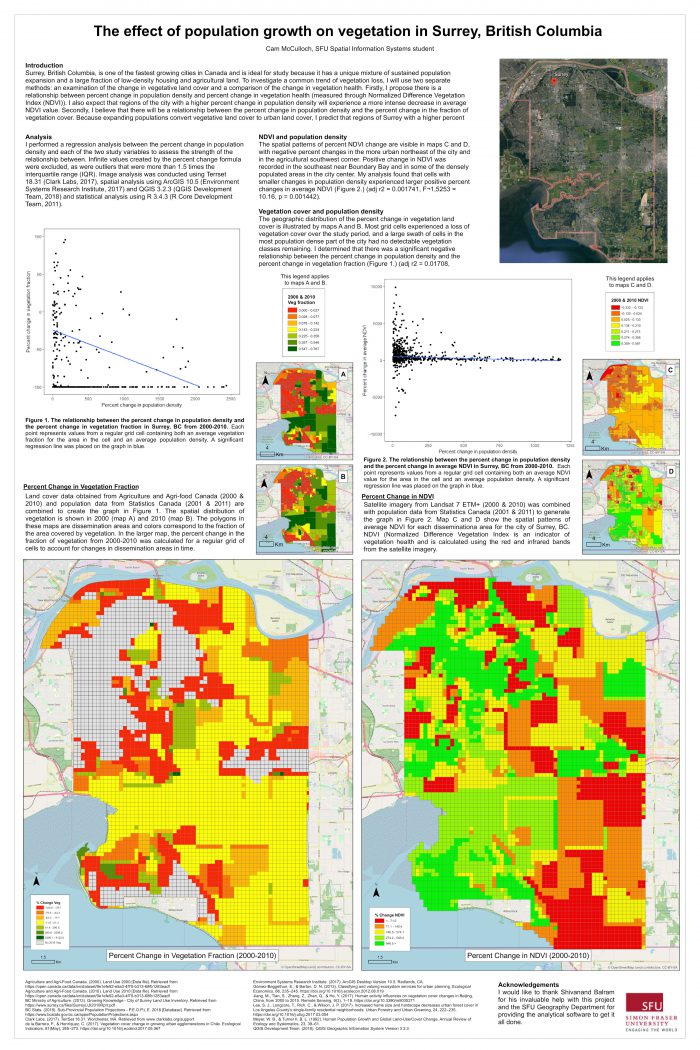 I recently submitted that directed studies project to Esri Canada for consideration for the SFU Esri Canada Higher Education GIS Scholarship, and was selected as the winner! As part of the award, I will receive training materials and access to courses to help improve my GIS skills, as well as admission to the Esri Canada User Conference in Vancouver in October. I am excited to take advantage of these opportunities, because I feel they will help make me a more capable scientist and increase my appeal to future employers. At my current job with Fisheries and Oceans Canada, I’ve had the chance to georeference older maps and create new maps for region-wide projects – all using the skills I learned during the SFU SIS certificate program.

I would recommend the SIS certificate program to any SFU student who is pursuing a career in science! As I learned during my courses, spatial data is becoming more and more prevalent across all scientific disciplines, and the ability to interpret it gives you an edge over the rest. The SIS program also paved the way for me to apply what I had learned towards a directed studies project, which helped me earn the SFU Esri Canada Higher Education GIS Scholarship. It has truly been one of the highlights of my time at SFU!